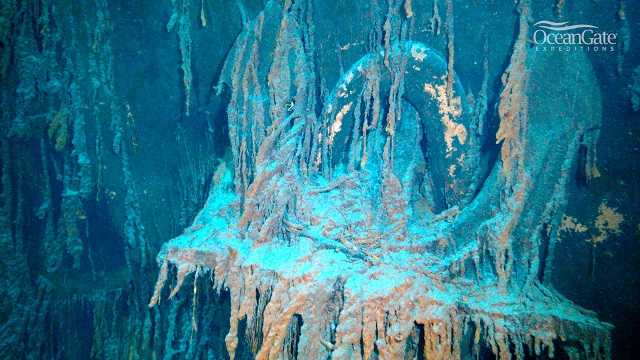 There are new great pictures of the Titanic. This first-of-its-kind footage, says Oceangate, provides scenes of Titanic’s renowned bow, the portside anchor, hull number one, an enormous anchor chain (each link weighs approximately 200 pounds or nearly 91 kilograms), the number one cargo hold, and solid bronze capstans. Also captured is dramatic evidence of decay where some of the Titanic’s rail has collapsed and fallen away from the ship.

If you haven’t seen the Oscar-winning movie Titanic yet, you should. In that movie, the director James Cameron recreated the Titanic in all of its glory, down to the minute detail. And the story of how Cameron came to make the film is amazing on its own.

After the Titanic was discovered, the maker of box office hits Terminator I and II, as well as Aliens, went on expeditions to the wreckage under the sea in a specially designed submarine. But the video technology that existed when the movie was made 25 years ago was limited. Now, new high definition video tech is giving the world a much better glimpse of the Titanic.

Oceangate explains that since its discovery in 1985, fewer than 250 people have personally the Titanic and surrounding debris field. The crew of the 2022 Titanic Expedition succeeded in capturing unprecedented 8k footage of the Titanic exposing an astonishing level of detail and colors. The extraordinary footage premiered on the OceanGate Expeditions YouTube channel. 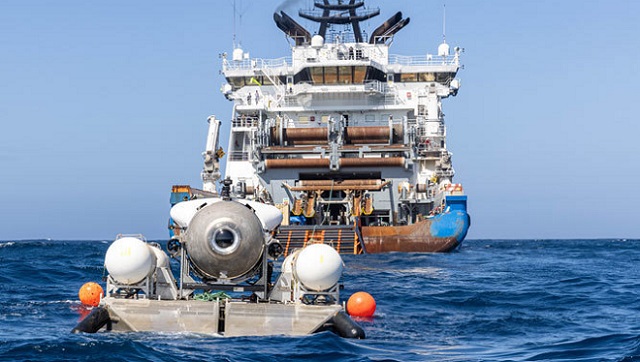 “The amazing detail in the 8k footage will help our team of scientists and maritime archaeologists characterize the decay of the Titanic more precisely as we capture new footage in 2023 and beyond. Capturing this 8K footage will allow us to zoom in and still have 4K quality which is key for large screen and immersive video projects. Even more remarkable are the phenomenal colors in this footage,” says Stockton Rush, President, OceanGate Expeditions.

In comparing footage and images from 2021, explained Rush, one can see slight changes in certain areas of the wreck. His science team will be reviewing the 8k, 4k, and other footage captured during the 2022 Titanic Expedition for any changes. Having experts aboard the Titan submersible during dives allows them to assess the shipwreck through direct observation, guide our exploration of different features of the wreck, and continue their study using the imagery, he said.

In the new footage, you see the name of the anchor maker – Noah Hingley & Sons Ltd. – for the first time ever. The video shows the crane used for deploying the enormous 15-ton anchor still located on the deck of the shipwreck and the shackle that was originally attached to the main mast that has now collapsed. It also shows three round structures along the inside of the railing. These are the triple fairleads that were used to feed the docking ropes to the bollards on shore to secure the ship to the dock when the Titanic was at port.

“I’ve been studying the wreck for decades and have completed multiple dives, and I can’t recall seeing any other image showing this level of detail,” said Rory Golden, OceanGate Expeditions Titanic expert and veteran Titanic diver.. “It is exciting that, after so many years, we may have discovered a new detail that wasn’t as obvious with previous generations of camera technologies.”

Argus Expeditions Ltd., dba OceanGate Expeditions, a company organized under the laws of the Commonwealth of The Bahamas is a company of undersea explorers, scientists, and filmmakers who are dedicated to manned exploration of the underwater world. Not satisfied with scratching the surface of the ocean near the shoreline, OceanGate Expeditions uses manned submersibles to create expeditions at depths far deeper than can be reached with SCUBA.