Researchers from Tel Aviv University and the Israel Oceanographic and Limnological Research Institute in Haifa have developed an innovative method for growing “enriched” seaweed enriched with nutrients, proteins, dietary fiber, and minerals for human and animal needs. This seaweed has the potential to be a natural superfood and to help secure food for the future of humanity.

According to the World Food Programme, as many as 828 million people go to bed hungry every night, and the number of those facing acute food insecurity has soared – from 135 million to 345 million – since 2019. A total of 50 million people in 45 countries are teetering on the edge of famine.

And the war in Ukraine aggravated global food insecurity because of the disruption that it is causing to the world supply chains and the inability of Ukraine to export grains that have been essential to worldwide food production.

The US National Ocean Service explains that seaweed is the common name for countless species of marine plants and algae that grow in the ocean as well as in rivers, lakes, and other water bodies. And, while seaweed is traditionally thought of as the green vegetation found along beaches, it in fact comes in many sizes such as the microscopic phytoplankton.

Seaweed is a great source of many vitamins, minerals, and fiber.

According to the researchers, the state-of-the-art technology significantly increases the growth rate, protein levels, healthy carbohydrates, and minerals in the seaweed’s tissues – making the “enriched seaweed” a natural superfood with extremely high nutritional value, which can be used in the future for the health food industry and to secure an unlimited food source.

The research was led by Ph.D. student Doron Ashkenazi, under the guidance of Prof. Avigdor Abelson from the School of Zoology, George S. Wise Faculty of Life Sciences at Tel Aviv University and Prof. Alvaro Israel of the Israel Oceanographic and Limnological Research Institute (IOLR) in Tel Shikmona, Haifa. The article was published in the scientific journal Innovative Food Science & Emerging Technologies. 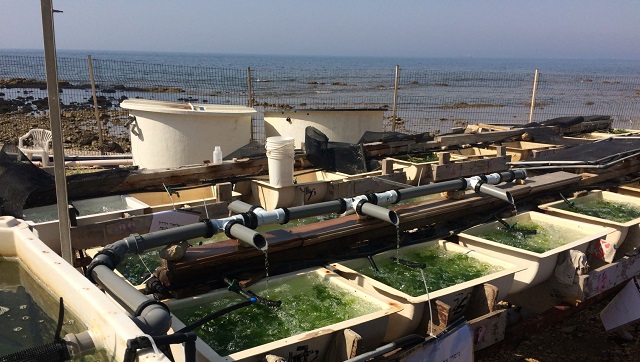 Layout of the land-based, outdoor, aquaculture system as was stationed at the IOLR institute, Haifa, Israel

Doron Ashkenazi explains that in the study, local species of the algae Ulva, Gracilaria and Hypnea were grown in close proximity to fish farming systems under different environmental conditions. The special conditions allowed the seaweed to flourish, and enabled a significant improvement in their nutritional value to the point of their becoming “enriched seaweed,” which is a superfood. (The use of seaweed as a rich food source that meets all human nutritional needs is even reminiscent of the biblical manna that fed the Israelites in the desert). It will also be possible to use the enriched seaweed in an applied manner for other health industries, for example as nutritional supplements or as medicine, as well as in the cosmetics industry.

“Seaweed can be regarded as a natural superfood, more abundant in the necessary components of the human diet than other food sources,” Ashkenazi adds. “Through the technological approach we developed, a farm owner or entrepreneur will be able to plan in advance a production line of seaweed rich in the substances in which they are interested, which can be used as health foods or nutritional supplements; for example, seaweed with a particularly high level of protein, seaweed rich in minerals such as iron, iodine, calcium, magnesium, and zinc, or in special pigments or anti-oxidants. The enriched seaweed can be used to help populations suffering from malnutrition and nutritional deficiencies, for example disadvantaged populations around the world, as well as supplements to a vegetarian or vegan diet.”

Moreover, unlike terrestrial agriculture, aquaculture, and in particular our proposed seaweed farming approach, does not require extensive land, fresh water or large amounts of fertilizer. It is environmentally friendly, and preserves nature and the ecological balance by reducing environmental risks. The new methodology in fact offers an ideal situation, for sustainable and clean agriculture. Today, integrated aquaculture is beginning to receive support from governments around the world due to its environmental benefits, which include the reduction of nutrient loads to coastal waters and the emission of gases and carbon footprints. In this way, it contributes to combatting the climate crisis and global warming.