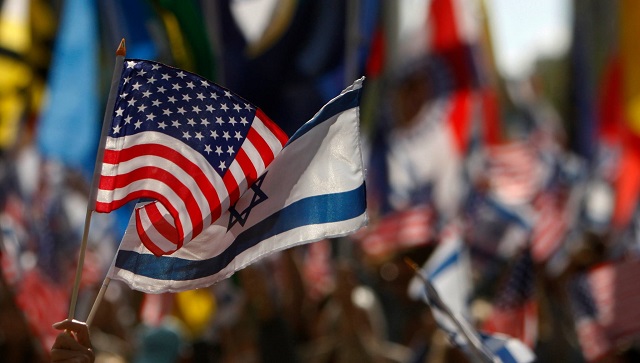 Prominent Jewish billionaires Robert Kraft and George Soros both gave $1 million to the cause of political lobbying in America on behalf of Israel, albeit to opposing sides as it were. Soros donated his money to the left-leaning upstart J Street lobbying group and Kraft gave his money to the more traditional lobby the America Israel Public Affairs Committee, AIPAC.

AIPAC declares its mission is to encourage and persuade the U.S. government to enact specific policies that create a strong, enduring and mutually beneficial relationship with our ally Israel.

J Street says that it organizes pro-Israel, pro-peace Americans to promote US policies that embody our deeply held Jewish and democratic values and that help secure the State of Israel as a democratic homeland for the Jewish people. “We believe that only a negotiated resolution agreed to by Israelis and Palestinians can meet the legitimate needs and national aspirations of both people,” declares J Street.

Both organizations declare that they work in support of Israel. However, each has been criticized by different American Jewish group for the opposite reason.

AIPAC has been around since 1963. It lobbies on behalf of Israel, no matter who leads its government, whether a left-wing or a right-wing political party. AIPAC did not take a position on the Oslo Accords in the 1990s and supported Israel with the same zeal whether Benjamin Netanyahu, Ehud Barak or Shimon Peres was its prime Minister.

But that, unfortunately, was a problem for many American Jews who support the political left in Israel. They felt that AIPAC was too close with Israel’s right and the American Republican Party. The latter may be only because of its support for Israel and the simple fact that Republicans in America tend to be bigger supporters of Israel with wealthy Jews like Kraft more likely to be Republican supporters.

So, this is why J Street was founded in 2007. It was established by people who felt that AIPAC had become right-wing. And so it makes sense that prominent American Jews known for being liberal, like George Soros, support it. But the criticism of J Street is that it takes a left-wing position itself, both in Israeli as well as American politics. It supports Democratic candidates. AIPAC, in contrast, never takes sides in the political debate in either country.

Robert Kraft, who was a prominent supporter of Donald Trump, made his donation through his Kraft Group, the holding company for the Kraft family’s business interests. The money went to AIPAC’s United Democracy Project, which calls itself an organization comprised of American citizens—Democrats, Republicans and Independents—united in the belief that “America’s partnership with our democratic ally Israel benefits both countries.” United Democracy Project says that it works to help elect candidates that share our vision and will be strong supporters of the U.S.-Israel relationship in Congress.

The George Soros Democracy PAC made the donation to J Street. Specifically, the funds went to the J Street Action Fund. J Street says that this PAC has been successful at raising contributions for federal candidates, and it also takes credit for helping to defeat President Trump in 2020, and elect pro-Israel, pro-peace leaders to the House, Senate and White House.”

This, in part, was why AIPAC was critical of the Soros donation. In a Tweet issued last week the organization said, “George Soros has a long history of backing anti-Israel groups. Now he’s giving $1 million to help @jstreetdotorg support anti-Israel candidates and attack pro-Israel Democrats. AIPAC works to strengthen pro-Israel mainstream Democrats. J Street & Soros work to undermine them.”