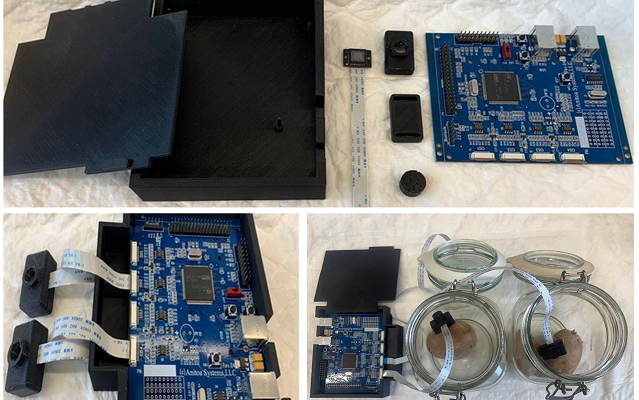 The Hebrew University in Jerusalem is working on ways to prevent the coming worldwide food crisis. It has developed a new biological sensor that can detect hidden rot in potatoes, in cooperation with the Volcani Institute.

New research study led by the Hebrew University of Jerusalem (HU) and the Israel’s Agricultural Research Organization (Volcani Institute) details the success of a biological sensor for early detection of hidden disease in potato tubers, one of Israel’s chief export industries at 700,000 tons a year.

And this new tech does not just apply to potatoes.

The University of Georgia explains that four types of organisms primarily cause plant diseases: fungi, bacteria, nematodes and viruses. These organisms are often referred to as plant parasites or pathogens. And many plant diseases can be seed-borne.

Despite advances in increased food production, explains the Hebrew University, half of all world’s harvested food is lost due to rot caused by microorganisms. Plants emit various volatile organic compounds into their surrounding environment, which can be monitored for early detection of plant disease and prevent food loss.

Israeli farmers import European potatoes for planting in Israel. However, a certain percentage of them carry disease within—either visibly or invisibly—that cause rot and significantly reduce the potato’s quality.

The Hebrew University-Volcani alliance is about to change that, they say. They have developed a sensor that detects disease and can be used to inhibit the rot from growing and spreading. Their study, published in the upcoming edition of Talanta, was conducted by Dr. Dorin Harpaz and her PhD student Boris Veltman at HU’s Faculty of Agriculture, Food and Environment, under the supervision of Dr. Evgeni Eltzov of the Volcani Institute. The team collaborated with the Volcani Institute’s Dr. Sarit Melamed and Dr. Zipora Tietel, as well as Dr. Leah Tsror from the Gilat Research Center.

The sensor relies on smart bioengineering and optics. When the sensor is exposed to an infected potato, a bacterial compound within lights up—with the strength of the luminescence indicating the concentration and composition of the rot. “The intensity of the light given off by the bacteria panel makes it possible to quickly and quantifiably analyze the characteristics of the disease, which the sensor can ‘smell,’ before the appearance of visible symptoms,” explained Eltzov. “The biosensor we developed will help identify diseased potatoes that do not yet have any external indications, and keep them away from healthy tubers, thus preventing the rot from developing or spreading to other healthy plants,” Harpaz added.

To form the bacteria panel, the team created a compound of four genetically-engineered bacteria that measure biological toxicity. In this study, the biological sensor detected disease before there was any visible trace, and caused the optical sensor to shine twice as brightly as did the sensors in non-infected potatoes. Their capabilities were also demonstrated in a previous study that used the sensors to detect toxicity among artificial sweeteners in sport supplements.

According to the researchers, early discovery of disease–before the potatoes are exported to foreign markets or replanted, offers a significant advantage to food growers. “The biological sensor can be used to quickly and economically identify hidden rot in potatoes, facilitate better post-harvest management, and reduce food wastage—particularly important given the current global food crisis,” concluded Harpaz.

Established in 1921, before the State of Israel, the Volcani Center is Israel’s national agricultural R&D center. With 200 scientists, it accounts for more than 75% of the country’s agricultural research and innovation and has been the driving force behind Israel’s renowned agricultural expertise. It is a governmental organization and officially an arm of the Ministry of Agriculture.