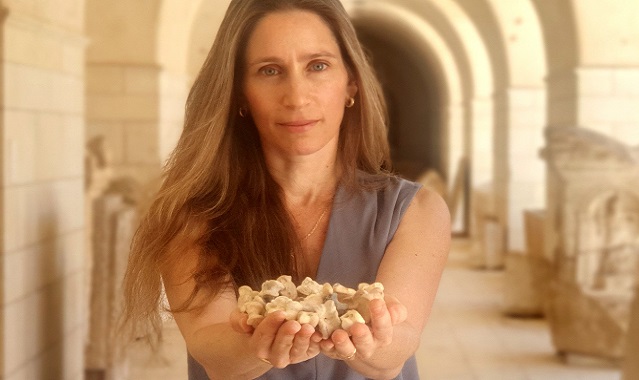 Israel Antiquities Authority (IAI) has made a rare archeological discovery. A rare assemblage of “astragali”—animal knuckle bones used for gaming and divination (seeking knowledge of the future or the unknown by supernatural means) —dating from the Hellenistic period (2300 years ago), was uncovered by Dr. Ian Stern in the Maresha-Bet Guvrin National Park in southern Israel.

The “astragali”—knuckle bones of goats, sheep and cattle—were used similarly to dice for gaming and for ritual divination, mainly by women and children. Some of the knuckle bones were shaved down, or perforated, or filled with lead, to be thrown more effectively, as dice.

The Israel Antiquities Authority called this an exceptionally large assemblage. The finds were recently published for the first time in the British archaeological journal LEVANT. They were studied by Dr. Lee Perry-Gal of the Israel Antiquities Authority, Prof. Adi Erlich of the Zinman Institute of Archaeology, University of Haifa, Dr. Avner Ecker of the Department of Land of Israel Studies in University of Bar Ilan, and Dr. Ian Stern of the Nelson Glueck School of Archaeology, Hebrew Union College, Jerusalem. The assemblage was discovered several years ago, in the huge underground cave complex below the ancient city of Maresha.

Tens of the dice bore Greek inscriptions: some were engraved with the names of gods associated in ancient times with human wishes and desires. Aphrodite, the goddess of fertility, love and beauty, Eros, the god of love, the god Hermes, the goddess Hera, and Nike, the goddess of victory, appear amongst other gods. On other knuckle bones, game instructions and various game-roles are engraved, such as “Robber”, “Stop!”, “You are burnt”, etc.

According to Dr. Lee Perry-Gal, Israel Antiquities Authority zoo archaeologist and research fellow in the University of Haifa, “The assemblage of astragali from Maresha is very unique, specifically the large quantity and good quality, and the many inscriptions. The assemblage shows that in ancient times of distress, as today, people sought help from external factors, in magic and spells and in the world of the unknown. In the past, men, and especially women, struggled with an environment of uncertainty, death, childbirth, and health issues, and tried to protect themselves with the help of magic. In addition, we know that astragali were used for games. It is noteworthy that we have examples of children buried with similar gaming dice. The cubes, which were a popular gaming activity, had a role in accompanying children to the next world, to be used there”. Perry-Gal adds, “Since the astragali symbolize good luck, it was customary to inter them under the house threshold, in the hope that they will bring good luck and prosperity.

“It is of interest that these knuckle bones are often found next to ostraca (pottery sherds with writing inscribed or written in ink), which bore Aramaic texts, such as, ‘Magical incantation’, or ‘If you do so, this will happen to you, which demonstrates their cultic role.

According to Eli Eskosido, Director of the Israel Antiquities Authority, “This fascinating research sheds light on the life and customs in the ancient world and reminds us that people are regular people all over the world. They dream and hope, and notwithstanding the harshness of daily life, they find time for playing and leisure.”