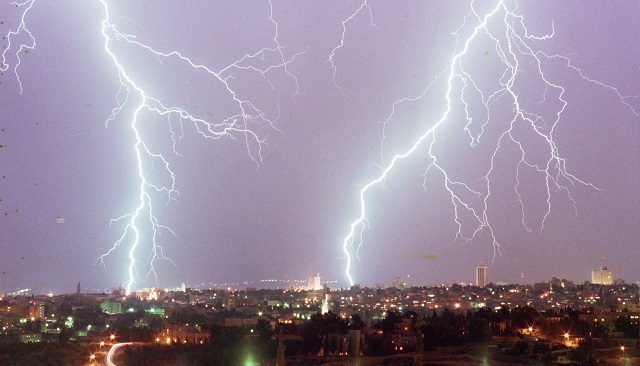 Research at the Hebrew University of Jerusalem (HU)’s Institute of Earth Sciences, led by Professor Daniel Rosenfeld and his doctoral student Zengxin Pan, and focused on the role of small particles (aerosols) in controlling the amount of rain and lightning produced by clouds. Their research has been able to explain why heavy ocean storms are accompanied by much less lightning than when a similar event occurs on land.

The researchers determined that it is the larger, coarse sea spray that reduces the amount of lightning by as much as 90%, whereas smaller aerosols increase lightning. The size of particles also affects rainfall. Their work clearly shows that the role of aerosols in clouds needs to be incorporated in climate models.

Lightening is exciting and scary at the same time. To this day, people are still awed by the sight of lightning and the roar of thunder. It’s most exciting when you can see a lightning bolt off the horizon.

And in Hebrew the word for lightning – Barak – is a popular name, both a first and a last name.

But people also need to fear lightning because it is so dangerous. Many fires are caused by it, which is why we use lightning rods. The rods attract the lightning and which gets absorbed by the mettle instead of hitting something that can catch fire.

But what is lightning?

During a storm, colliding particles of rain, ice, or snow inside storm clouds increase the imbalance between storm clouds and the ground, and often negatively charge the lower reaches of storm clouds. Objects on the ground, like steeples, trees, and the Earth itself, become positively charged—creating an imbalance that nature seeks to remedy by passing current between the two charges.

Rosenfeld’s findings, published in Nature Communications, fill in the gaps in previous theories about what was responsible for the difference in lightining between land and ocean storms. It had always been assumed that the dearth of lightning in ocean storms was due to cleaner air over the ocean. However, keen observations had already shown that even highly polluted air is associated with reduced lightning at sea when sea spray aerosols are abundant.

The HU researchers in collaboration with scientists at Wuhan and Nanjing Universities in China, and the University of Washington, were able to use satellite imagery to track clouds over land and sea. This was combined with lightning measurements from the Worldwide Lightning Location Network (WLLN) and with data that provided information on the number of aerosols in the clouds. “We found a major cause for such a difference between ocean storms and those on land,” shared Rosenfeld. “The effect of aerosols on clouds has been underappreciated. It needs to be incorporated into the models for better weather and climate prediction.”