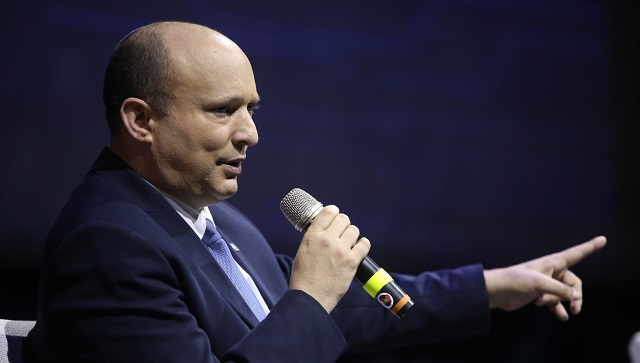 Cyber Week, a large annual international cybersecurity event, hosted each year at Tel Aviv University in Israel, is currently underway. Israel’s soon to be outgoing Prime Minister Naftali Bennett addressed the Main Plenary of the conference on Tuesday morning and spoke about his government’s successes.

Naftali Bennett leads a coalition government that is currently undergoing a process of dissolving itself after only one year in office and calling for new elections to the Knesset, the fifth in 3 and a half years.

When asked if his government has been a success or not, Naftali Bennett answered, “The short answer is, yes.” The Prime minister went on to discuss how before his coalition government was formed Israel was going through a number of problems, including a political deadlock that caused continuing elections and the failure to pass a new state budget for three years.

“Israel became managed again,” boasted Naftali Bennett. “We stated managing the country the way that a good country should be managed.”

“We passed a budget after three years, a budget packed with reforms,” said Bennet.

“We inherited a country at a very high unemployment rate,” boasted Bennett adding that now, “Everyone in Israel who wants a job can get one.”

However, Bennett conveniently left out the fact that when his government formed the entire world was still suffering through the worldwide Covid crisis and that now it has pretty much ended. For example, Israel has reopened for tourism.

Naftali Bennett said, though, that he is most proud of the fact that his coalition showed that people with opposing political positions were able to come together for the good of the country.

“When there are decent and good people we can all work together for the betterment of Israel,” he declared.

Bennett went on to speak about how the world can overcome cyber threats.

On the matter of cyber threats and whether or not Israel is ready for them, Naftali Bennett said that using cyber security a country can get things done that in the past would have required risking the lives of a number of military commandos. As such Bennett said that it is a “No brainer… This is why inevitably cyber is going to become one if not the most prominent dimension of future warfare. It just makes sense.”

Bennett went on to explain the importance of global cooperation in cyber security.

“Global collaboration in cyber is vital because the same bad guys who are attacking one company are country are the same bad guys who are attacking a lot of countries,” he said. So if one nation finds a way to defend against cyber threats – especially when it comes to a specific threat – it can share that knowledge with other nations to their common benefit.

Over the past 12 years, Cyber Week has become internationally acclaimed as one of the top cyber security events in the world.

Cyber Week offers a unique gathering of cybersecurity experts, industry leaders, startups, investors, academics, diplomats, and government officials. With more than 9,000 attendees from more than 80 countries, this conference offers a thought-provoking exchange of knowledge, methods, and ideas that you won’t want to miss.

Events will run for a full week and include over 50 roundtables, panels, workshops, forums, BSides and more.