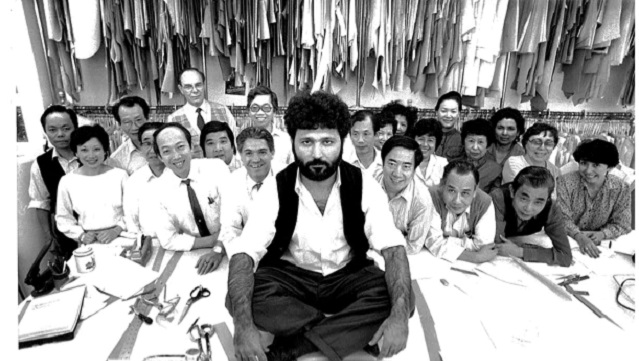 Famed fashion mogul Elie Tahari has a new documentary movie about his life coming out. “The United States of Elie Tahari,” got its debut at the Brklyn Film Festival in New York over the weekend.

Elie Tahari was born in Jerusalem in 1952 to an Iranian Jewish family. He moved to America in 1971 with only $100 to his name. Tahiri got his start in the world of fashion working as an electrician at a clothing boutique.

He is credited with popularizing the tube top. Elie Tahari began designing his eponymous label Tahari in 1973. In the following years, he opened his first boutique on Madison Avenue, posted the company’s first billboard in New York City, and held his first fashion show at Studio 54.

Tahari expanded in the eighties, turning his attention to the tailored suit that helped define a decade. His first advertisements appeared in Vogue and Harper’s Bazaar. In 1989 his first shop in Bloomingdales NYC opened, followed by Saks Fifth Avenue, and Eli Tahari was named one of Crain’s most successful 40 under 40.

In the 1990s, Elie Tahari began the decade with his first cover of Women’s Wear Daily featuring a Tahari wool suit highlighted as the season’s trend and is admitted to the Council of Fashion Designers of America. And in that decade, Tahari initiated a significant expansion campaign including licensing and international sales.

For more than 40 Years, Elie Tahari’s international brand has had a presence on five continents and is sold in more than 600 stores in over 40 countries. The brand has expanded to include women’s shoes, sunglasses and accessories, and menswear and has come to define modern sophistication with the designer’s inspired collections of understated grace and elegance.

“The United States of Elie Tahari” is the first documentary ever produced about Elie Tahari. Filmed in 2020, Directed & Produced by David Serero, the movie tells the life of Elie Tahari from his birth and origins, through all of his achievements and his legacy. Part of the documentary is also dedicated to Tahari’s creative process and endurance in the fashion world. Several fashion personalities such as Fern Mallis (aka the Godmother of Fashion), Fashion designers Nicole Miller and Dennis Basso, Melissa Rivers (daughter of comedian Joan Rivers), Arthur S. Levine, WallStreet Journal Fashion Journalist Teri Agins, Instagram influencer Julia Kananovich, artist Lynna Davis, Disco music, models, Studio 54 and more, are part of this documentary, from which the trailer is released today.

“In this documentary, you’ll discover the whole inspiring story of Elie Tahari and his fashion world and process, as rarely shown before,” said director David Serero. “I want this film to be loved by fashion lovers and connoisseurs, as well as the ones who are not familiar with that important artistic environment. This documentary is educative, inspiring, and a celebration! You’ll feel joining a large party! said Serero. Elie Tahari is the definition of courage, determination, kindness, and…chutzpah! His parents fled Iran and moved to Israel, where he lived in a refugee camp Ma’Abarot’, then moved to New York without speaking English and has contributed to the New York fashion life for more than 40 years with his iconic and visionary signatures such as the Tube Top, the Woman Suit and more.”