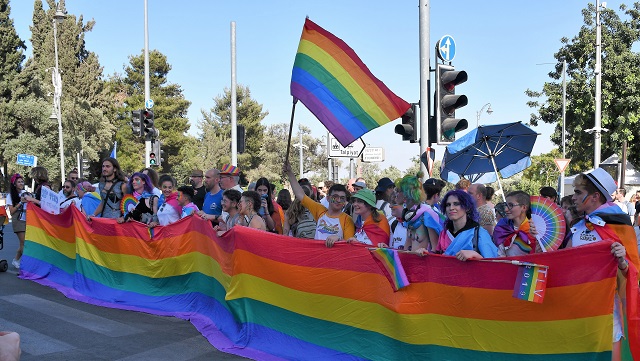 The Jerusalem LGBTQ+ Pride March of 2022 went forward on Thursday in the face of death threats made against the event’s organizers, as well as several openly gay members of Israel’s Knesset. As a result of the threats, police security was so tight that no spectators were allowed to observe the march through downtown Jerusalem on the sidewalks.

The march began with a rally in Jerusalem’s Liberty Bell Park, located on the edge of the city’s downtown area. The park was packed with people of all ages and from different backgrounds, many of whom came in from other parts of the country.

There were all types of people there. Some wore rainbow colors to signify their movement’s rainbow flag. Others simply carried rainbow flags with them. 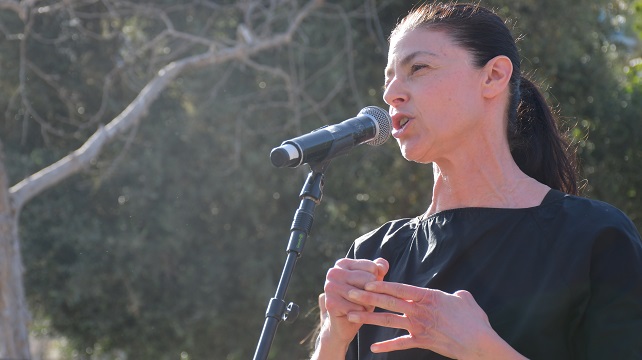 Both offered the crowd similar sentiments and promises of changes in government policies and Israeli laws as they pertain to the LGBTQ communities. One such change is allowing for gay adoption, recognizing legally the citizenship rights of children adopted abroad by gay couples as well as providing the same opportunities for subsidized fertility treatments and surrogate motherhood services for gay couples.

Horowitz, who is openly gay, stated, “No one will threaten us, no one will scare us. No one will take us back to the closet. This year we finally moved from protest – to revolution. Thanks to you. Because you took to the streets because we fought and did not give up.”

But he also told the crowd that they still had a lot of work to do in the future in order that, “every person, in every corner of the country, will feel safe, will feel equal. Continue forward.”

At about 5 PM local time the crowd began its march uphill through town, from one park to the other, up Keren Heyesod and King George Streets through the heart of downtown Jerusalem until they reached Independence Park where the festivities continued.

While the police may have gone to extremes with their security presence on Thursday, it can, fortunately, be reported that there were no violent incidents during the march. And people were concerned that there might be a repeat of what happened at the 2015 march when one participant, Shira Banki, was murdered, stabbed to death by a Haredi man.

The security was such that one might have thought that the President of the United States was in town. For hours ahead of the march’s official start people were not allowed to even cross through the downtown streets where police officers were seen everywhere. There were also police observing from balconies of the apartment buildings above. And when someone was seen at one point stepping out onto a patio above the street several police officers ran over to the area to ensure that the person was not a threat to the marchers. 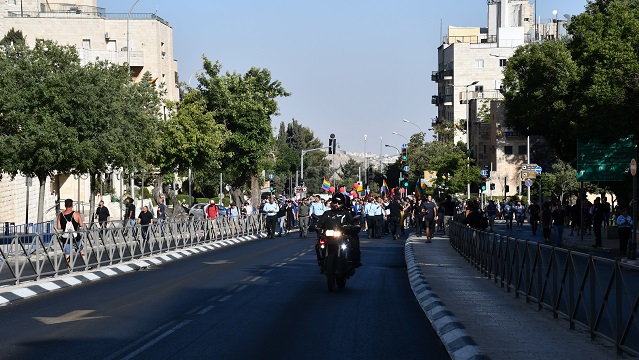 This was in stark contrast to the Jerusalem Day parade held on Sunday where thousands marched through some of the same areas of town carrying Israeli flags proudly. But the area was not closed to the public.

Some of the people expressed to JBN their disappointment with the security but acknowledged that it was needed for their protection.

Constantine Bilitch is an Israeli who lives in Jerusalem. He told JBN that it was important for him to come to the event to show his support, especially because he says that it is not easy to be openly gay in Jerusalem. “We are here to say that it is OK,” he said.”

As for why it was still important to hold the march and not just a rally Constantine explained, “The march is significant. For me it symbolizes the struggle, especially here in Jerusalem because it is not easy to be gay here. It is not Tel Aviv.”

While Constantine acknowledged the need for the large police presence there he lamented its necessity. 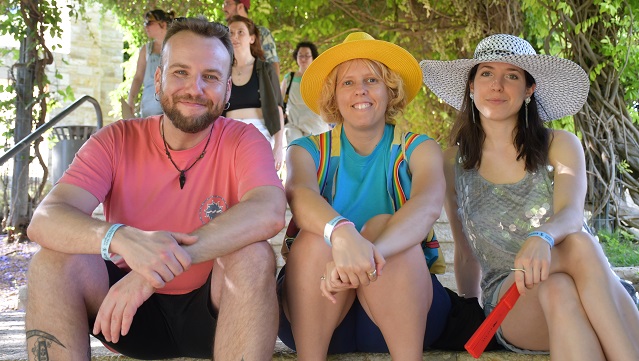 Michal also lamented the need for such a large security presence. She added that while no one could come and watch the march itself, people still knew that it was taking place and so it was important to hold it in addition to the rally.

Alon Sandler came in from Tel Aviv for the march. Alon told JBN that he comes to the Jerusalem march every year and that the Jerusalem march is more important than the one in Tel Aviv because, “the city here doesn’t accept the [LGBT] community as much as Tel Aviv, so the parade here is more of a political statement.”

And Alon is one of the people who felt that it was necessary to also have a march for political reasons. “Because it is a protest it has to be through the city,” he said, “and has to block roads, it has to affect the everyday life of people around it.”

He also appreciated the extra security, His friend Lital Bar-Noy agreed with him saying that just the need for so many police there on Thursday meant that the march would get more attention.