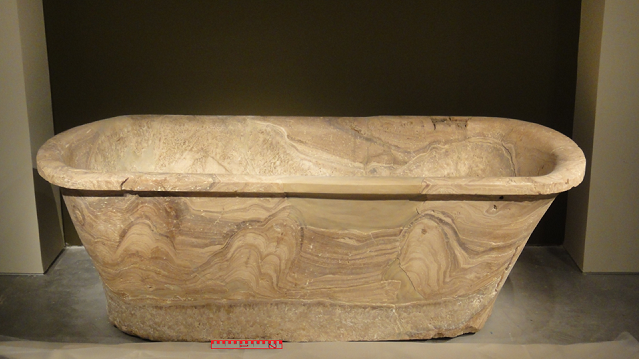 Researchers from Bar-Ilan University in Israel have uncovered new information about the type of stone that Herod the Great used for building in ancient Judea – alabaster. Specifically, he used alabaster found in Israel. He also used this in making his personal furniture, including his bathtubs.

Herod the Great ruled Israel – then called Judea – as a Roman client King for more than 30 years. He was known for great building projects, like the refurbishing of the Temple in Jerusalem and the construction of a palace on Masada, as well as for his lavish lifestyle. And he was also a paranoid nut who ruled as a despot.

But today people mostly know him for all of the works that Herod left behind.

Alabaster is a soft rock that looks like marble and is easy to carve. This made it perfect for such building in ancient times. Alabaster is also translucent, coming in light colors, which made it popular for use in ornamentation.

The researchers explained that from the Middle Bronze Age, Egypt played a crucial role in the appearance of calcite-alabaster artifacts in Israel, and the development of the local gypsum-alabaster industry.

Until now this long-held assumption was never scientifically tested. But the recent identification of a calcite-alabaster quarry in the Te’omim cave, located on the western slopes of the Jerusalem hills (near modern-day Beit Shemesh), calls this hypothesis into question.

The new study, recently published in the nature journal Scientific Reports, scientifically refutes the hypothesis and. It also proves that the stone in Herod the Great’s alabaster bathtubs were quarried in Israel rather than Egypt.

Analytical data were first collected from samples of two well-defined sources, from Egypt and modern-day Israel. The Egyptian sources included both ancient and modern calcite-alabaster samples. The ancient samples were obtained courtesy of the Kunsthistorisches Museum in Vienna, Austria. These ancient vessel remains were collected by the Austrian archaeological expedition to Giza in the nineteenth century CE.

The calcite-alabaster from Israel included raw material from the Te’omim cave quarry, chips (mining debitage) found in the cave near the quarry, and chips and a stone block (raw material carved to a cube, but not yet used to make a vessel) from Umm el-‘Umdan — an archaeological site near the Te’omim cave. Additional samples were collected from a speleothem in Natuf cave located in Wadi en-Natuf in western Samaria.

Next, through a multidisciplinary approach, the calcite-alabaster samples from Israel and Egypt were analyzed with the assistance of Prof. Gil Goobes and Prof. Amnon Albeck, of the Department of Chemistry at Bar-Ilan University using four analytic methods, most of which have not been previously used, to determine their origin: inductively coupled plasma (ICP) analysis, routine infra-red (IR) spectroscopy, 1H- and 31P- solid state NMR (ssNMR) experiments and C and O stable isotope ratio analysis to determine their composition and their crystalline structure.

“All four analytical methods applied in the study provided consistent results, clearly distinguishing the Israeli from the Egyptian calcite-alabaster for the first time,” said Prof. Albeck of the findings.

The same methods were then applied to two of Herod the Great’s royal bathtubs, which were made of finely worked calcite-alabaster and found in the Kypros fortress and the palace of Herodion, located just south of Jerusalem. The results unequivocally indicated that the bathtubs were quarried in Israel and not in Egypt, the main source of calcite-alabaster in ancient periods.

“The fact that both bathtubs were unequivocally quarried in Israel and not in Egypt, as we would have expected due to the high quality of the stone, was a particular surprise because that means that Herod the Great used local produce, and that the calcite-alabaster industry in Judea in the second half of the first century BC was sufficiently developed and of high enough quality to serve the luxurious standards of Herod, one of the finest builders among the kings of that period,” said Prof. Aren Maeir.

The source of calcite-alabaster artifacts cannot be determined by traditional archaeological methods. Furthermore, petrographic analysis, the main method used to determine the source of Israeli calcite-alabaster, shows wide variability in texture, depending on its depositional environment. Consequently, this method could not be used to identify the source of the bathtubs.