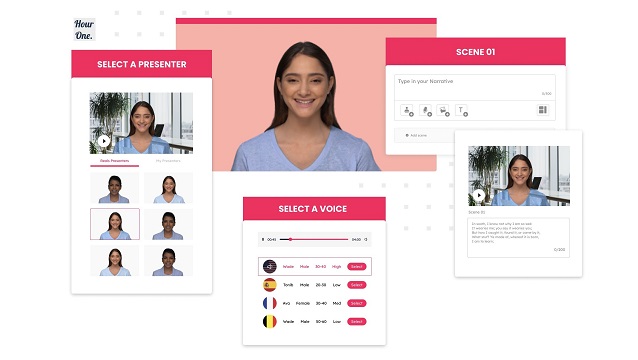 Hour One’s AI platform converts people into virtual human characters that can be activated with lifelike expressiveness, in any language, for a range of commercial and professional use cases.

Founded in 2019, Hour One is an AI company specializing in the development of virtual humans for use in professional video communications. Hour One’s lifelike virtual characters are based on real humans, and can be animated with human expressiveness just from text, enabling businesses to upgrade their communications with unprecedented ease and scale.

It’s something out of a sci-fi movie. Instead of just talking to someone on the phone, or having a video chat on Zoom, you can put on a pair of VR goggles and actually see them as clear as day. And, who knows, maybe in the near future there will even be holographic tech that will recreate the person right in front of your face without the need for goggles like they have on Star Trek.

But for now, Hour One says that its AI platform converts people into virtual human characters that can be activated with” lifelike expressiveness, in any language, for a range of commercial and professional use cases”. Following a short filming session in which a person’s likeness is captured, Hour One’s AI technology generates a virtual twin that can then be deployed in a variety of roles, including a virtual receptionist, salesperson, HR representative or language teacher. The humans behind the virtual characters can earn a passive income for appearances across a range of professional and commercial content, pointing to an expansive vision of the future of work.

Now, think about what it would have been like if we already had such tech during the Covid shutdowns. Kids would not have lost out from their personal interaction with their teachers so much because they could have seen them up close in a virtual representation. And the Hour One tech would have also allowed for a realistic virtual office and for people to see their loved ones without taking the chance of spreading infection.

With its self-service platform, Reals, businesses can access Hour One’s technology more easily than ever, to generate fully-produced videos automatically, in just minutes. Hour One’s customers include some of the biggest names in e-learning and media, including Berlitz and NBC Universal and DreamWorks, and spanning HR, e-commerce, SaaS and more. Hour One is headquartered in Tel Aviv and New York City.

“The ability to easily turn any person into a virtual character that can then be activated using just text, will completely transform the way businesses and their customers engage each other,” said Hour One CEO and Founder Oren Aharon. “Very soon, any person will be able to have a virtual twin for professional use that can deliver content on their behalf, speak in any language, and scale their productivity in ways previously unimaginable. We’re incredibly excited that Insight Partners has come on board at this pivotal moment in our journey.”