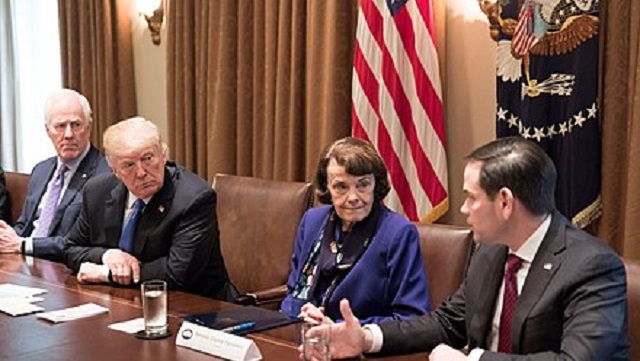 Dianne Feinstein is the senior Democratic Senator from the State of California. She has served in the Senate for almost 30 years. But Dianne Feinstein is also 88 years old and has been showing signs of her age in recent years, leaving many to speculate that she may have no choice but to soon step down from office.

More and more, Dianne Feinstein is appearing to be confused – even lost – when she speaks in public. Forgetting people’s names and so forth is not unusual for someone her age. But in the Senator’s case, the situation is so severe that many are concerned that she might be suffering from dementia. Some of her Senate colleagues have reportedly said that they need to reintroduce themselves to Feinstein on more than one occasion and her aids have been said to need to constantly remind her of where she is and what is going on around her.

One such lawmaker told the San Francisco Chronicle recently about Dianne Feinstein’s troubles, “I have worked with her for a long time and long enough to know what she was like just a few years ago: always in command, always in charge, on top of the details, basically couldn’t resist a conversation where she was driving some bill or some idea. All of that is gone.”

“She (Dianne Feinstein) was an intellectual and political force not that long ago, and that’s why my encounter with her was so jarring. Because there was just no trace of that,” added the lawmaker.

The problem is that Dianne Feinstein is not up for reelection again until the year 2024. She was first elected in 1992 in a special by-election to fill the seat of then Senator Pete Wilson who had been elected governor of California. So many people – especially California Democrats – are calling on her to retire now. This is because the current Governor of California, Gavin Newsom, is up for re-election this fall. Should he lose and a Republican take office, then her seat would be filled by a Republican ahold she be forced out of office for any reason after the start of 2023. This is because in California the governor fills an open senate seat and the appointee serves until the next election year.

While it is not likely that a Republican will unseat Governor Newsom in this year’s elections, the Democrats’ control of the Senate is precarious and the party is expected to lose seats in this year’s elections. If Dianne Feinstein is unable to participate actively in the Senate and possibly even miss votes it will hurt her party considerably. So even if she makes it to the 2024 elections, her very presence could prove disruptive to her party in the Senate.