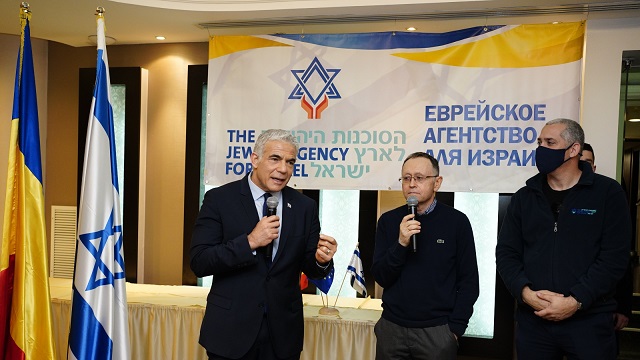 The Jewish Agency for Israel is taking part in the worldwide humanitarian efforts to aid the Ukrainian people suffering under the Russian invasion. The Agency’s efforts extend to all Ukrainians, not just the Jews who have been coming to Israel since the fighting began.

At The Jewish Agency’s center, Lapid received a briefing from The Jewish Agency’s Chief Operating Officer Yehuda Setton. Setton summarized the organization’s efforts in deploying staff and volunteers in Romania and other countries along the Ukrainian border in order to help thousands of Jewish Ukrainian refugees receive assistance and make Aliyah. As such, the Foreign Minister also heard from olim (immigrants) set to move to Israel who shared their touching personal stories of fleeing Ukraine.

The Aliyah center in Bucharest is one of many facilities established by The Jewish Agency and the International Fellowship of Christians and Jews (IFCJ) immediately after the war broke out in Ukraine last month. The centers provide humanitarian aid and assist the influx of Jewish Ukrainian refugees escaping the country and hoping to immigrate to Israel.

The Jewish Agency also initiated a humanitarian aid operation called ‘Torenu” (Our Turn), which is being organized together with the Federation of Local Authorities in Israel. The operation is collecting basic necessities from the Israeli public and transferring them to Jewish Agency centers active along the Ukrainian border. These items mainly consist of winter equipment like sleeping bags, blankets, coats, gloves, hats and scarves and hygienic items like soap, shampoo, deodorant, toilet paper and toothpaste.

The Jewish Agency has raised more than $19 million since the beginning of the war to support humanitarian and rescue operations along the Ukrainian border, with over $11 million coming from its partners at JFNA and Keren Hayesod. The current needs of this operation stand at over $85 million.

More than 2,000 Jews have arrived at Aliyah (immigration to Israel) processing centers run by The Jewish Agency and the International Fellowship of Christians and Jews (IFCJ) that are located in countries bordering Ukraine. The future olim are escorted from the border to temporary housing facilities where they receive their visas to Israel.