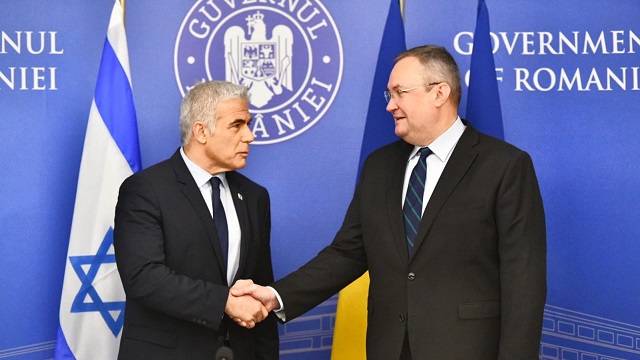 Israel’s Foreign Minister Yair Lapid is taking the lead in Israel’s humanitarian efforts to help the people of Ukraine suffering under the continuing Russian invasion of their country. On Sunday he traveled to Romania where he met with Romanian Prime Minister Nicolae Ciucă and Romanian Foreign Minister Bogdan Aurescu.

And the Prime Minister of Israel Naftali Bennett once again offered Israel’s services as a mediator between Russia and Ukraine. Bennett made the offer during a telephone conversation that he had with Ukrainian President Volodymyr Zelenskyy Saturday night. President Zelensky said that the two leaders, “talked about Russian aggression and the prospects for peace talks. We must stop repressions against civilians: asked to assist in the release of captive mayor of Melitopol and local public figures,”

While in Bucharest Yair Lapid said, “Like Romania, Israel condemns the Russian invasion of Ukraine. It’s without justification, and we call on Russia to stop its firing and attacks, and to resolve this conflict around the negotiating table.”

On His meeting with the Romanian Prime Minister, Yair Lapid tweeted, “I just concluded a meeting with Nicolae Ciuca which dealt with the situation in Ukraine and its impact on Romania. We discussed the situation of refugees at the border and Israel & Romania’s humanitarian aid.” Lapid said that he thanked the Prime Minister for Romania’s assistance and close cooperation with the personnel from Israel’s Ministry of Foreign Affairs who are currently working in that country, helping transfer thousands of Ukrainian refugees from the border to planes that will take them to Israel.

“Our relations that are good in routine times have strengthened into real partnership in an emergency,” added Lapid.

Israel has been bringing Ukrainian Jews to the country as new immigrants as well as non-Jewish Ukrainians who are in need of temporary sanctuary until the fighting ends and they can return to their homes. Israel is also sending tons of food, clothing, medical supplies and other aid to Ukraine, much of which is being donated by Israeli civilians. On that Yair Lapid said, “Israel will do all it can to help reach a peaceful solution. We are working in complete coordination with our ally, the United States, and with our European partners in order to try and end this violent tragedy as quickly as possible.