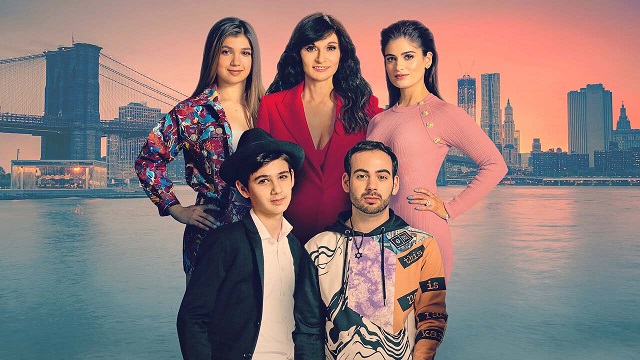 “My Unorthodox Life” on Netflix follows the family of Julia Haart, cetner. Image courtesy of Netflix

Julia Haart, star of the so-called reality television series on Netflix called “My Unorthodox Life” is not only getting divorced, but she is also being sued by her former company Elite World Group. Her estranged husband and former business partner Silvio Scaglia filed papers on both matters. Scagia also alleged that she “illegally” withdrawing $850,000 from a joint account.

The 51 one year old former ultra-orthodox woman was forced out as CEO of Elite World Group just a few weeks ago. Apparently the company alleges that Julia Haart spent $125,000 of company funds on herself. Specifically, it says that she spent the money on cosmetic surgery, including breast enhancements. $850,000 from a joint account.

The show My Unorthodox Life tells the story of Julia Haart and her children who all left the Hasidic Jewish world where they had lived in Monsey New York. They not only left the closed community there – one in which women have few if any career options – but they also chose to give up on Jewish religious practice. While billed as reality show that tells a true story similar to the one portrayed on the hit show “Unorthodox,” the program is unfortunately nothing more than another broadcast of a group of narcissists playing for the camera.
–

I’m so excited to finally share the cover of “BRAZEN: My Unorthodox Journey from Long Sleeves to Lingerie” out on April 12, 2022! It’s available for pre-order right now. https://t.co/3YPoRiiP3P #BrazenHaart pic.twitter.com/TADorqk4Fd

While Unorthodox told the real story of a woman who escaped a loveless marriage that she was forced into as a young girl in Brooklyn, My Unorthodox Life is just one big extended selfie video like the one that people put on Instagram or TikTok seeking their chance at fame. So if you have been able to force yourself to watch just a few minutes of the show then you might not have any trouble believing the charges leveled against Julia Haart.

Julia Haart married entrepreneur and Italian billionaire Silvio Scaglia in 2019. He is her second husband. She was previously married to Yosef Hendler with whom she had four children. But Haart left Handler when she left her community. In March 2019, she became CEO and CCO of the talent media conglomerate Elite World Group, whose parent company is controlled by Scaglia.

So far, Julia Haart’s side has dismissed the lawsuit as just being part of her husband’s posturing in the divorce proceedings. A representative told Page Six, “Any allegation of impropriety is demonstrably false. Julia’s compensation structure was designed and implemented by Silvio Scaglia who personally approved each and every expense. Julia remains confident the courts will validate the truth despite baseless – and desperate – accusations.”