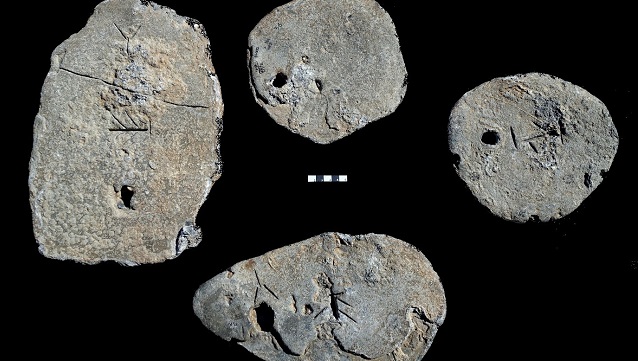 Scientists from the Hebrew University in Jerusalem have uncovered previously unknown trading links among distant countries from the study of lead ingots and stone anchors found among shipwrecked cargo off the coast of Israel. The items helped to shed light on commercial and diplomatic life in the area.

The Late Bronze Age of the Mediterranean Sea basin – from 3,200 years ago – was an era characterized by complex supra-regional relations and diplomacy, with trade and exchange of gifts being common practices. The ingots come from around the time that the Israelites lived under the rule of the Judges and were still divided into separate sovereign tribes. It would not be for another 200 years that King David would united the people into one kingdom and establish a capital in Jerusalem.

Hebrew University of Jerusalem (HU)’s Institute of Archaeology Professor Naama Yahalom-Mack collaborated with Professor Yigal Erel at HU’s Institute of Earth Sciences to determine the source of four lead ingots among a shipwreck’s cargo near the port of Caesarea, on the coast of Israel. By studying the source of the lead in the ingots and comparing their findings to other archeological artifacts from across the Mediterranean Sea, the researchers were able to prove that the ingots were made of lead mined in the western Mediterranean island of Sardinia.

Sardinia is located to the west of Italy and to the south of France.

So, this proves that ores mined in the western Mediterranean were used in ships that traveled to Israel on the sea’s eastern shoreline in era one thousand years before the Romans established dominance over the whole of the Mediterranean, and centuries before any of the region’s emerging powers began to use sea power as a weapon of war.

The ingots were incised with Cypro-Minoan markings which, though still not interpreted to this day, are known to have been in use in Cyprus during the Late Bronze Age. Accordingly, the researchers concluded that there were vast commercial ties between the two populations with the purpose of transporting raw material.

Yahalom-Mack maintains that this study reveals to us today that the Cypriots had an major role in trade during that era that they were willing to travel as far away as 2,500 km (1550 miles) across the sea, this being the distance between Cyprus and Sardinia. That is how they acquired the lead in the ingots. Now, this was a really great distance for sailors to cross back in that era as sailing and the science of navigation were still in their infancy. However, the travelers would have been able to stay close to the shorelines of Turkey, Greece and Italy and followed the sun to find their way.

“We think that along with lead, they also imported tin — a sought-after metal in Cyprus and the surrounding area for making bronze. These three metals — copper, lead, and tin — were sold to port cities along the coastlines, including the shores of today’s Israel,” said Professor Yahalom-Mack said of the ingots.

The findings were published in the Journal of Archaeological Science: Reports’s February edition and was conducted in collaboration with Prof. Assaf Yasur-Landau and Dr. Ehud Galili at the University of Haifa’s Institute for Maritime Studies.