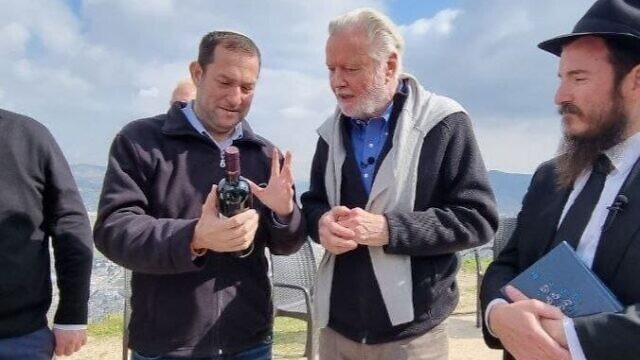 Oscar winning actor Jon Voight is currently in Israel. The father of fellow Oscar winner Angelina Jolie is filming a new movie in the country.

Now 83 years old, Jon Voight is known as a strong supporter of Israel, as well as the Chabad Jewish organization. He has also been known lately for taking right-wing political stands in America and is a supporter of Donald Trump’s. This, of course, has not been taken very well from his “Coming Home” co-star Jane Fonda who is best known for having been a radical –left-wing activist in her youth. The two both won best actor Oscars for the movie.

“I do not understand why Judea and Samaria are called the ‘West Bank,’” Jon Voight said in a press release issued by the Samaria Regional Council. “If you look at a map, it is clear the area is the heart of Israel.”
–

Jon Voight was presented with a bottle of wine from the community’s winery by Yossi Dagan. “You will plant vineyards in the mountains of Samaria,” Dagan told to Voight. “What I hold in my hand is not just a bottle of wine; 2,000 years ago the prophet Jeremiah promised that one day the people of Israel would return to their land, return to Samaria and plant vineyards.”

“When I give you wine from the Har Bracha settlement at the top of Mount Gerizim, it’s not just a bottle of wine; you are actually holding a prophecy of Jeremiah that is being fulfilled right here,” Dagan told the actor.

Jon Voight has most recently starred on the hit TV show “Ray Donovan” and can next be seen in the biopic “Reagan” about Ronald Reagan, due out later this year.