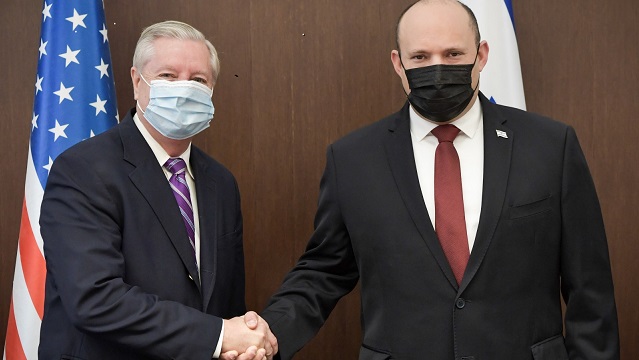 Prime Minister Naftali Bennett of Israel is making history on Monday as the first ever serving Israeli premiere to visit the Arab Gulf State of Bahrain. The announcement that Bennett had flown to the country came as a surprise as the government had not revealed his plans ahead of time.

The Abraham Accords, which saw a full peace treaty signed between Israel, Bahrain and the United Arab Emirates in the summer of 2020 keeps on bringing about new firsts. The Naftali Bennett trip comes just after Benny Gantz became the first Israeli Minister of Defense to ever visit the country.

During the visit, Naftali Bennett will meet with Bahraini Crown Prince and Prime Minister Salman bin Hamad al-Khalifa. The two leaders first met at the UN Climate Change Conference (COP26) held this past November in Glasgow, where the Crown Prince invited the Prime Minister to make his first official visit to Bahrain. They will be sure to discuss further cooperation between their nations on climate change as Israel’s high tech sector leads the world in new environmentally friendly green tech.

The leaders will discuss additional ways to strengthen bilateral ties. Additionally, Naftali Bennett and the Crown Prince will also discuss the importance of peace, advancement and prosperity in the region, and especially the advancement of diplomatic and economic issues, with an emphasis on technology and innovation. And the two can certainly be expected to discuss the continuing threat of a possible nuclear capable Ira. One of the things that brought the two nations together is the common enemy that they have in Iran.

Prime Minister Naftali Bennett will also meet with the Ministers of Finance, Industry and Transport of the Kingdom of Bahrain, and with representatives of the local Jewish community.

The trip to Bahrain comes just after Prime Minister Naftali Bennett met with US Senator Lindsey Graham (R-SC) at the Prime Minister’s Office in Jerusalem Monday morning. The two discussed the Iranian threat, which is faced by both Israel and the US, and ways to deal with it. They also discussed the security challenges in the Middle East and ways to strengthen bilateral cooperation. Bennett told Senator Graham that he has always been a true friend of Israel in both good times and in more challenging moments.