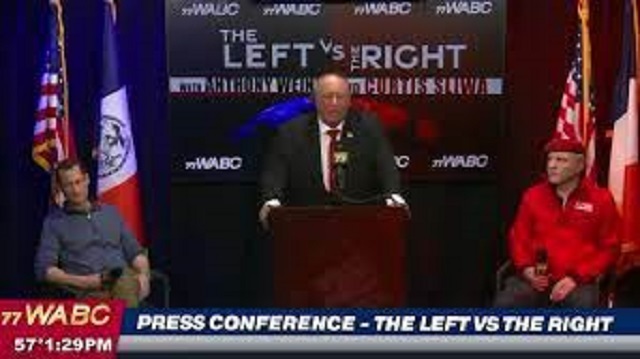 Anthony Weiner is getting yet another chance to be a somebody who gets to pretend that his opinion matters and spout out whatever comes to his tiny mind. Weiner will co-host a new daily radio political talk show in New York with Curtis Sliwa, who was just humiliated in a horrific defeat in last year’s New York City Mayoral race. The show is on WABC Radio and called, “The Left Versus The Right.”

Yes, that Anthony Weiner! The former Congressman. The one who was forced to resign after he was caught sending pictures of himself in his underpants to young women. Unsolicited pictures. The man who at first lied and said that his phone must have been hacked and the pictures stolen. The narcissistic man child who just assumed that any woman who saw his private parts would lose all self-control and come running to him. The one who was then forced to resign from Congress after more than 12 years of service once the truth came out.

But it was no big loss. His democratic colleagues shed no tears. No one liked him anyway. That was because Anthony Weiner, during his brief tenure, spent more time in front of news cameras, more time talking on the cable news channels, than actually being a congressman. His fellow members of the House seemed to only know who he was because he was on TV all of the time.

So Anthony Weiner went away in 2011 and licked his wounds. Then came the 2013 New York City Mayoral race. And Weiner tried to make a political comeback. He somehow did well in the polls, at first. But wouldn’t you know it – as Forrest Gump would say – he did it again. More allegations of his sicko behavior came out. And what was Weiner’s excuse this time? Well, he held a press conference in which he said that when he resigned from the Congress he already admitted that there was more of this stuff out there. But the perplexed press in attendance were forced to remind Weiner that these were entirely new allegations, not more of the same stuff that happened before and that only then was uncovered.

So the man’s campaign failed. Nothing could save Anthony Weiner’s dream of being Mayor of New York City. Not even his new campaign slogan taken from the Britney Spears song “Oops!… I Did It Again!” But at least he still had a god wife standing by his side, through all of the turmoil and controversies, Huma Abedin. Yes that Huma Abedin. The one who worked for Hilary Clinton when she was the Secretary of State and when she ran for President.
–

77 WABC’s owner and operator @JCats2013 held a press conference this afternoon in Studio 77 to announce the debut of “The Left Versus The Right with Anthony Weiner and @CurtisSliwa.” The co-hosts will discuss the prevalent issues that the city of New York faces. pic.twitter.com/UPxSVSZlNI

Well, it is not like Anthony Weiner could have ever done anything to hurt Hillary’s Presidential campaign. Oh, wait, he did. At the height of the 2016 presidential elections more revelations were made about his nefarious activities. This time he sent out pictures to women while his son was sleeping in bed at his side and could be seen. He also solicited underage girls. The following year Weiner pled guilty and was convicted of the federal crime of transferring obscene material to a minor. But long before that the FBI said that during its investigation into Weiner it found sensitive government information on his computer related to Clinton. This was revealed to the public just a week before Election Day in 2016.

Weiner spent almost two years in prison and was released in 2019. So, what should Anthony Weiner do now with his life? Well, he should go back to doing the only thing he seemed to be any good at to begin with anyway. Weiner should do another local radio show where he could shout his opinions to the world without ever having to actually do anything productive or even atone for his sins.

And who should join him on the show? Well, none other than local New York political personality Curtis Sliwa. Like Anthony Weiner, Sliwa also ran for Mayor of New York. And unlike Weiner, he actually did get his party’s nomination. And as the Republican nominee, Sliwa went on to get a whopping 27.8% of the vote.