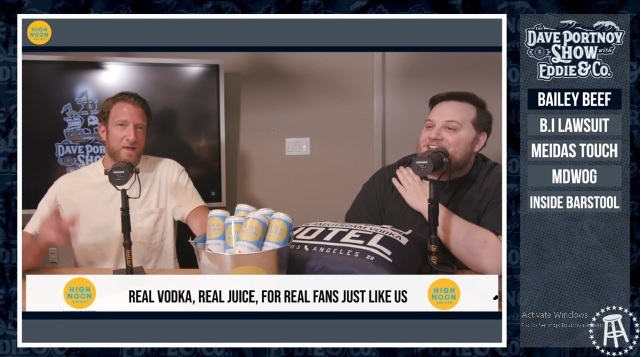 Barstool Sports founder Dave Portnoy has had enough with all of the attacks being made against him and all of what he says are false accusation of sexual misconduct that were reported on by the website Insider.Com. So Portnoy is doing what any red blooded patriotic American would do given the situation – he is suing.

The head of Barstool Sports filed a lawsuit in a Boston federal court this week against Insider over what he calls, “false and defamatory” stories about his sex life. The suit also calls Insider’s reports an “outright fabrication” and that the stories were “hit pieces” intended “to sensationalize a story in order to drive reader traffic.” The suit also says that Insider had “malicious intent” in its actions and that it was guided by “clickbait journalism.” In America a public figure like Dave Portnoy must prove that there was malicious intent on the part of the respondent to a defamation suit in order to win the case.

Last November, the 44-year-old Barstool Sports’ founder was accused by a number of women of taking them on abusive and humiliating trysts. One accuser told Business Insider of Dave Portnoy’s behavior, “It was so rough I felt like I was being raped. He videotaped me and spit in my mouth and choked me so hard I couldn’t breathe.”

“It was so painful,” she added. “I kept trying to get away and he was like, ‘Stop running away from me,’” and then “just went harder.”
–

The lawsuit comes as little surprise after what Dave Portnoy said in a post on Barstool Sports last week. “One of the main themes in the Business Insider article is that I video girls without their consent,” he wrote. “This is absolutely not true. I have never done that once in my life and I never will. I’m so scarred I’ll probably never video again anyway. But it doesn’t even make sense the way they claim it happens.”

But the Barstool Sports owner will have a big hurdle to jump if he is to win in court. In the end it may be just a matter of Dave Portnoy’s word against the women who accused him.