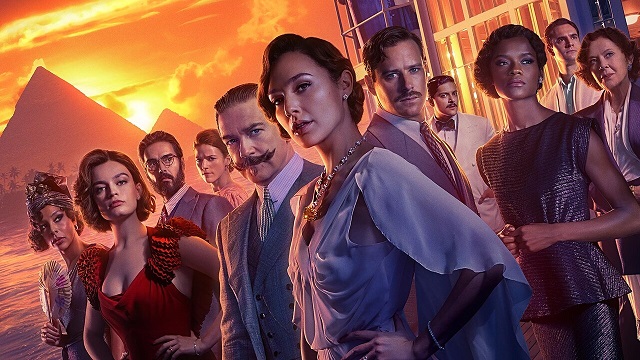 The new “Death on the Nile” has been banned in Kuwait because it stars the Israeli actress Gal Gadot. So much for how the Abraham Accords have made all of the Arab Gulf states more open minded about Israel.

Death on the Nile is based on the Agatha Christie book of the same name. It is a Hercule Poirot mystery in which he investigates the murder of a wealthy woman while traveling by boat on the Nile RIVER IN 1920S Egypt. The movie is a remake of the original film from 1978 in which Peter Ustinov starred as Poirot.
–

Kenneth Branagh directed Death on the Nile which comes out five years after he also directed a remake of another movie based on an Agatha Christie mystery, Murder on the Orient Express. In both mysteries, the murder takes places in an enclosed area and so the number of possible suspects is highly limited. And as with the original and the previous Branagh film it has an all-star cast that includes Annette Bening, Russell Brand and Gal Gadot as the victim. Game of Thrones star Rose Leslie also appears as does recently disgraced actor Armie Hammer who apparently fantasizes about eating women.

So, why did Kuwait ban Death on the Nile? Well, Kuwait’s Al-Qabas newspaper reported that the government only made the decision after a slew of demands that it do so were made on social media that it be banned. People in Kuwait apparently complained about Gadot because during last year’s Operation Guardian of the Walls Gadot posted comments on social media defending the Israel Defense Forces. During the operation Israel conducted assaults on the Hamas terrorist organization into Gaza after it launched missiles at civilian targets in Israel.

From Death on the Nile website: Belgian sleuth Hercule Poirot’s Egyptian vacation aboard a glamorous river steamer turns into a terrifying search for a murderer when a picture-perfect couple’s idyllic honeymoon is tragically cut short. Set against an epic landscape of sweeping desert vistas and the majestic Giza pyramids, this tale of unbridled passion and incapacitating jealousy features a cosmopolitan group of impeccably dressed travelers, and enough wicked twists and turns to leave audiences guessing until the final, shocking denouement.