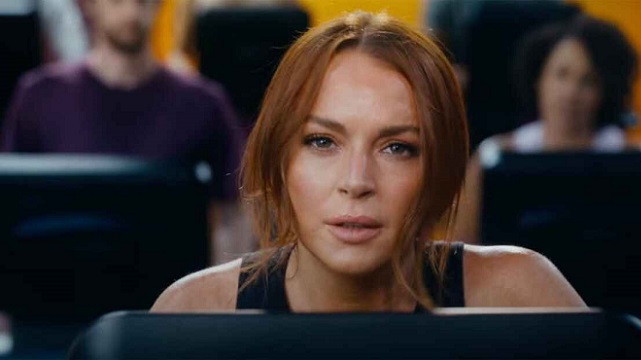 Lindsay Lohan has had her ups and downs over the years, mostly ups. The onetime darling of a child star turned into one of Hollywood’s bad girls, self-destructing on drugs and alcohol and wild behavior. But now she is doing a Super Bowl TV commercial together with the man who has gone where no man has gone before: Captain Kirk himself William Shatner.

The new Super Bowl ad is for the Health club chain Planet Fitness. It shows Lindsay Lohan trying out different machines, interposed with shots of sleeping in her bed as well as competing on Jeopardy. And it shows paparazzi crying with their cameras because Lohan is so busy being in her new life of being productive that she no longer gives them any juicy material to film to sell to the tabloids for their big headlines and internet click bait.
–

The ad is called “What’s Gotten into Lindsay?” It also co-stars Dennis Rodman and Danny Trejo. Lindsay Lohan can be seen, well we don’t want to give it away, but behind can be seen a sign that says “judgment free zone.”

And the commercial comes with one of the great celebrity personalities of all time – William Shatner. Shatner narrates Lindsay Lohan’s activities saying things like “She’s even more productive, trading DUIs for DIYs,” and “The verdict is…” Get it!

At one point Lindsay Lohan turns to the camera and says, “It was refreshing to put my past to bed once and for all and share with people how I am living my life today.” It is actually refreshing to see someone able to make some money poking fun at herself. At least celebrities can take advantage out of having been taken advantage of by the media.
–

The new Lindsay Lohan Planet Fitness commercial will air during Super Bowl LVI on Sunday February 13. It will be played in Los Angeles between the Los Angeles Rams and the Cincinnati Bengals.