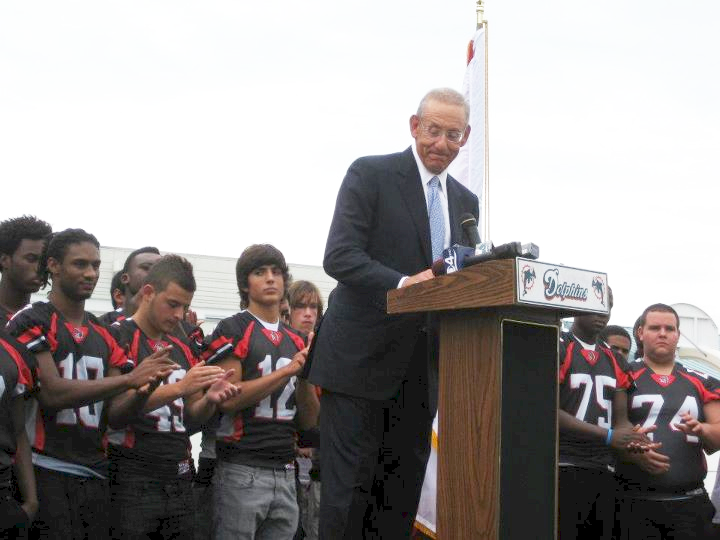 Stephen Ross, the owner of the NFL’s Miami Dolphins, has been accused of offering big payments to get his team to deliberately lose games. The accusation comes from the team’s former head coach, Brian Flores. Flores made the allegation in a federal lawsuit over discrimination that he filed on Tuesday.

Specifically, Flores maintains that Stephen Ross offered him $100,000 for every football game that he would lose on purpose. Ross fired Flores at the end of the past season when the Dolphins failed to make the playoffs yet again.

Stephen Ross is also owner of The Related Companies, a global real estate development firm he founded in 1972.

But why would the owner of an NFL team want his club to lose? Well the claim is that the offer came from Stephen Ross during the Miami Dolphin’s 2019 season, which was also Brian Flores’ first year as head coach. The team finished that season with a record of 5 wins against 11 loses and in last place in the NFL’s East Division. And its all about the draft picks.

The NFL draft is held in an order based on the previous season’s team records, with the worst team selecting first and the best teams selecting at the end of the list. The worse a team’s win loss record, the higher a draft pick they get. And Stephen Ross would certainly have understood the importance of getting more high draft picks in order to rebuild his team. And that year the Cincinnati Bengals ended with a 2 – 14 record, the worst in the league, and got the first draft pick. The Bengals drafted LSU star quarterback Joe Burrow who just led Cincinnati to a division title and the 2022 Super Bowl.

In the lawsuit, Flores complaint states, “In January 2022, Mr. Flores, who spent three years as the Head Coach of Defendant Miami Dolphins, Ltd., found himself without a job. He was fired by the Dolphins after leading the team to its first back-to-back winning seasons since 2003.” As for Stephen Ross, the suit says, “The purported basis for his termination was alleged poor collaboration [with Ross].”

“In reality, the writing had been on the wall since Mr. Flores’ first season as Head Coach of the Dolphins, when he refused his owner’s directive to ‘tank’ for the first pick in the draft. Indeed, during the 2019 season, Miami’s owner, Stephen Ross, told Mr. Flores that he would pay him $100,000 for every loss, and the team’s General Manager, Chris Grier, told Mr. Flores that ‘Steve’ was ‘mad’ that Mr. Flores’ success in winning games that year was ‘compromising [the team’s] draft position.’”

If any merit is found to these allegations, Stephen Ross will be forced to sell the Miami Dolphins. And this will be the least of his problems. But most observers are saying that this is all just sour grapes on the part of Flores and with some sort of “smoking gun” evidence nothing will come of it.