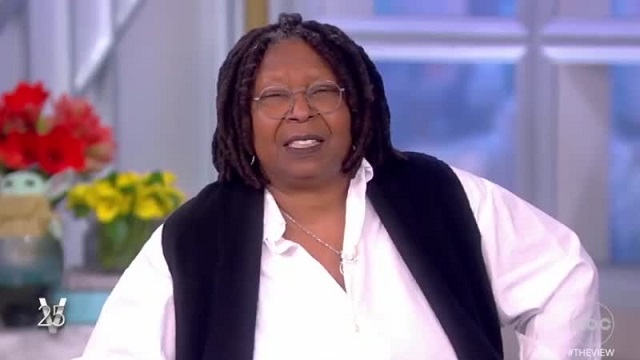 Whoopi Goldberg, the standup comic turned Academy Award-winning actress, turned daytime TV talk show host on “The View,” has reinvented herself as some sort of den mother, as well as the dean, of daytime television. She is now considered to be, for some reason, the new Oprah, or Barbra Walters. And as such her opinion now matters.

So when Whoopi Goldberg says something, people listen. And if she says something that can cause fake news to be spread, especially when it comes to the Holocaust, we have a problem. And she did just that on an installment of her show “The View” that aired on Monday.

The moment came as the collective talking heads on the show, who for some reason enough people in America could care less about their opinions, spoke about this month’s decision by a Tennessee school board to remove the Holocaust book Maus from its curriculum. And of course the world needed to hear what an actress like Whoopi Goldberg thinks about such serious matters.

So, what did she say?

And she compounded the problem adding “If you’re going to do this, then let’s be truthful about it, “these [the Jews and the German Nazis] are two white groups of people.” So the Holocaust was just about white people killing other white people.

Or, perhaps she is simply so ignorant as to the facts, the actual facts and not the alternative ones, as they pertain to the Holocaust that she can say something so patently false. She does not even know that the Germans declared Jews to be a separate race, biologically and genetically different from the rest of humanity. So, Whoopi Goldberg is in dire need of a history lesson.

And, if this is the case, then how did the 66 year old ever get to a position where she is treated as the wise old sage?
–

As always happens in these cases, Whoopi Goldberg has now attempted to apologize for what she said. The actress tweeted later on that on the show, “I said the Holocaust ‘is not about race, but about man’s inhumanity to man.’ I should have said it is about both.”

“As Jonathan Greenblatt from the Anti-Defamation League shared,” she wrote, “’The Holocaust was about the [Nazis’] systematic annihilation of the Jewish people – who they deemed to be an inferior race.’ I stand corrected. The Jewish people around the world have always had my support and that will never waiver. I’m sorry for the hurt I have caused,” added Whoopi Goldberg.

Do we just accept the apology and move on or do we understand now that Whoopi Goldberg is not just ignorant of important historical facts, but she also seems to think that somehow murdering Jews just because they are Jews is less offensive than murdering people because of their race?