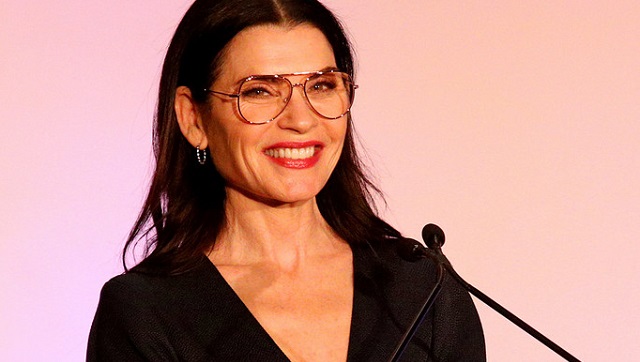 ER star Julianna Margulies will be hosting television programs to commemorate International Holocaust Remembrance Day. The day is observed on 27 January every year, the anniversary of the liberation of the Auschwitz concentration by the Red Army in 1945.

Julianna Margulies, who proved herself as a star in her own right with the hit show “The Good Wife,” will actually be hosting two different TV programs. “Undeniable: The Truth to Remember,” will air SaturdayJanuary 29 at 8 p.m. EST in the U.S. on CBS and will also be available for live streaming and on demand on Paramount+. The program follows five Holocaust survivors who share their harrowing stories with a diverse group of students from Hastings High School in Houston, Texas, a school that does not traditionally teach the history of the Holocaust. The personal remembrances of these survivors lead these Texas teenagers to embark on an emotional journey of learning and discovery.

A three time Emmy winner, Julianna Margulies also hosted “The Hate We Can’t Forget: A Holocaust Memorial Special” for Smithsonian Channel/MTV International, which premiered last night. It follows four Holocaust survivors who share their harrowing stories with kids from school districts that don’t teach the history of the Nazi slaughter of six million Jews. Woven together are the heart-wrenching, surprising and hopeful stories of Rose and Arthur Gelbart, two child-survivors of the Holocaust who have been happily married for 66 years, and Pieter Kohnstam, who was babysat by Anne Frank before her family was captured.

Host Julianna Margulies explores the impact and legacy of the Holocaust on a new generation of Gen Z and millennials – and the dangers of forgetting. Texas high school students discover the story of a survivor and her surprising similarity to their own issues. A pop quiz reveals their lack of knowledge, but they are stunned when they hear Houston Holocaust survivor Ruth Steinfeld’s journey of survival.

The program is also available worldwide starting Thursday and can be seen in repeat broadcasts as well as on line in the U.S.
–

“As we recently witnessed the harrowing hostage crisis at a Texas synagogue, violence against the Jewish community is reaching record highs,” said Chris McCarthy, President and CEO ViacomCBS Media Networks & MTV Entertainment. “This is why it is imperative for us to learn from the horrors of the Holocaust, use our platforms to showcase the stories of survival and lock arms with those bravely fighting antisemitism and hatred in all of its forms.”

Julianna Margulies can currently be seen on the Emmy winning Apple+ TV show “The Morning Show,” which is based loosely on the Matt Lauer scandal.