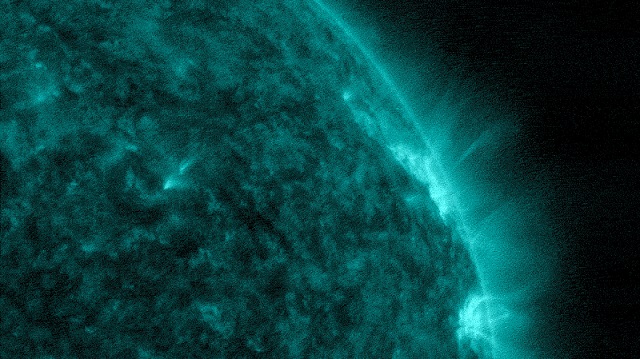 A solar flare classified as mid-level was captured by NASA’s Solar Dynamics Observatory, which watches the Sun constantly, on film. The image of the solar flare is stunning.

You might have scene a disaster movie where a solar flare was so powerful it reached all the ware to the Earth and scorched at least half of the planet. Fortunately, such things are just science fantasy and not science fact. There is no reason to believe that such an event could happen, especially considering that the Earth is 80 million miles away from the sun. And its size relative to the sun means that such a solar flare would need to be emitted a exactly the right time and from the a very specific point on the sun’s surface for it to be emitted on a direct path to the Earth.

However, solar flares can cause problems here on Earth. Specifically, the radiation emitted has been known to interfere with communications on the Earth’s surface. Along with heat and light, radiation is also emitted at all times from the Sun and a solar flare can increase the amount spewed out across a wide swath of space and eventually reach the Earth.

Solar flares are large eruptions of electromagnetic radiation from the Sun lasting from minutes to hours. The sudden outburst of electromagnetic energy travels at the speed of light, therefore any effect upon the sunlit side of Earth’s exposed outer atmosphere occurs at the same time the event is observed. The increased level of X-ray and extreme ultraviolet (EUV) radiation results in ionization in the lower layers of the ionosphere on the sunlit side of Earth. Under normal conditions, high frequency (HF) radio waves are able to support communication over long distances by refraction via the upper layers of the ionosphere.

When a strong enough solar flare occurs, ionization is produced in the lower, more dense layers of the ionosphere (the D-layer), and radio waves that interact with electrons in layers lose energy due to the more frequent collisions that occur in the higher density environment of the D-layer. This can cause HF radio signals to become degraded or completely absorbed. This results in a radio blackout – the absence of HF communication, primarily impacting the 3 to 30 MHz band. The D-RAP (D-Region Absorption Prediction) product correlates flare intensity to D-layer absorption strength and spread.

Solar flares usually take place in active regions, which are areas on the Sun marked by the presence of strong magnetic fields; typically associated with sunspot groups. As these magnetic fields evolve, they can reach a point of instability and release energy in a variety of forms. These include electromagnetic radiation, which are observed as solar flares.
–

The Sun emitted a significant solar flare early this morning, peaking at 1:01 a.m. ET. NASA’s Solar Dynamics Observatory captured an image of the event, which was classified as M5.5.https://t.co/9RsMR5suI3 pic.twitter.com/zK9mADK47H

“This event, in particular, disrupted radio communications over the Indian and Pacific oceans — so its likely biggest impact was a disruption of maritime communications,” said Jesse Woodroffe, a program scientist and expert in space weather at NASA.

“It’s not exceptionally strong in the grand scheme of things,” Woodroffe said, “but it nevertheless can have significant effects depending on what portion of the Earth is sunlit at the time of the flare.”