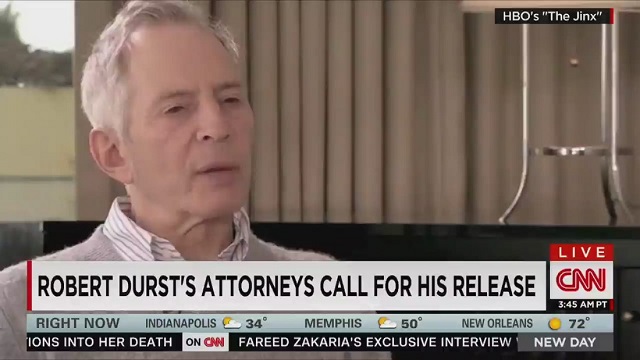 Robert Durst did not escape justice in the end, but relatives of his victims may have preferred it if he had to spend more of his last years on Earth behind bars. Durst died in prison on Monday at the age of 78. And in a bizarre twist of what was already an absurd saga stretched out over many years, Robert Durst lawyer is now claiming that his death could mean a posthumous reversal of his convictions, well at least some of them.

Last October, Robert Durst was convicted of murdering his friend Susan Berman. At the time he was already serving a seven year sentence on Federal weapons charges. The convictions came years after he escaped justice in Texas for the murder of a friend. And he was suspected of other crimes as well.

Ironically, Durst’s passing means that his conviction in the State of California is now legally vacated because Durst was appealing his case at the time of his death. This is because the courts did not yet rule on his appeal before he died.

His lawyers are already applying for his convictions to be vacated. But the real question here should be “why.” Why does it matter? Why bother? He’s dead now, so do the lawyers just want to have an excuse to charge Durst’s estate more legal fees?

But a vacated conviction is not the same thing as an acquittal. LA County Deputy District Attorney John Lewin explained, “To acquit means that a jury has determined that the prosecution did not put on enough evidence to prove guilt beyond a reasonable doubt. It’s not the same as someone being found innocent. In California, Durst dying doesn’t mean it’s an acquittal. It’s simply that the conviction is vacated.”

“In the end, Bob Durst was completely unremorseful and unrepentant,” Lewin said. “He refused to take any responsibility for his actions, to the point of repeatedly and continuously perjuring himself during his testimony in trial to a level that I don’t think anybody’s ever seen. For all those reasons, my sympathies are with the victims and families, and I’m gratified that we were able to have a jury listen to the evidence. We had five months of trial and they made the determination that he was responsible for the deaths of three people.”

Durst famously confessed to the murders while in a bathroom during the filming of the HBO mini-series about him. Apparently he did not realize that the microphone he was wearing during an interview could still record him speaking during a break.

But Robert Durst said that he was high on methamphetamines while being interviewed for the HBO documentary series about his life, “The Jinx: The Life and Deaths of Robert Durst.” This is part of Durst’s excuse for why he “confessed” to murder during the series.

The final episode of “Jinx” had the most shocking revelation of the series. After an interview, Robert Durst went into the bathroom not knowing that the microphone he was wearing was still on. He was recorded saying, “What the hell did I do? Killed them all, of course.”