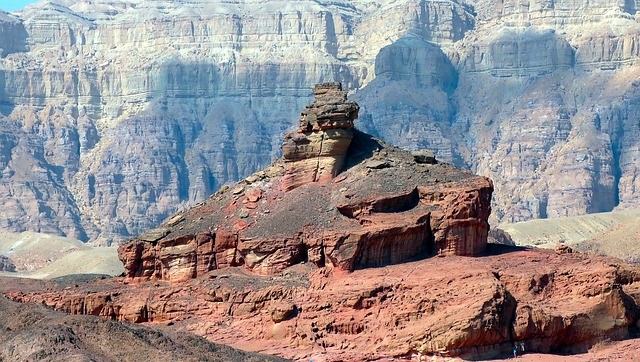 Timna Valley in the Arava Israel

The Arava region in Israel, located to the north of Eilat on the Red Sea and running up to the Dead Sea area, was known in the ancient world as a center for copper mining. The Timna mine just north of Eilat was even in use until modern times. Now, a new Tel Aviv University study has determined that about three thousand years ago, the Arava Valley’s copper industry managed to thrive and become the largest and most advanced smelting center in the ancient world.

The study was conducted by graduate student David Luria of TAU’s Jacob M. Alkow Department of Archaeology and Ancient Near Eastern Cultures and Sonia & Marco Nadler Institute of Archaeology, and is being published in the journal PLOS ONE.

When we think of precious metals, we think of gold silver and platinum. People don’t generally think of copper as having much value. But it is a good conductor of electricity and so it is used in electrical generators and motors for electrical wiring and in electronic goods, such as radios and televisions. So, we see copper wiring everywhere.

And Copper is also an essential nutrient for the body that enables the formation of red blood cells, helps maintain healthy bones, blood vessels, nerves, and immune function, and contributes to iron absorption. And it is also used in military industries in all manner of items from bullets to bombs.

But that is today. Why was copper so important in the ancient world?

Well, it is a key component in bronze and its mixture with tin heralded the Bronze Age. By smelting copper with tin people in ancient times made a new metal that was more malleable than pure copper, but still strong. The making of bronze led to the development of all manner of new tools that in turn hastened the advancement of civilization. And it was also used for weapons, so nations, like Egypt, which were rich in copper were able to establish dynasties.

According to David Luria, the copper industry in Canaan at that time was concentrated in two large mining areas – one in Timna (north of Eilat) and the other in Faynan (in the northern Arava, in Jordan). Previous research on the subject has claimed that the high level of technology employed there was made possible thanks to Egyptian technologies brought to the region during the voyage of the Egyptian Pharoah Shishak in 925 BC. This theory was strengthened in 2014 following the discovery of a scarab bearing the figure of Shishak in Faynan, and again later in 2019, following the development of a new scientific model that claimed that a sudden technological leap had taken place around the time of Shishak’s journey.

Luria, on the other hand, argues that the great economic and technological success of the copper industry in the Arava was not related to Egyptian capabilities, but rather to the talent of the Arava people, who learned to use the two advanced methods we know today as “trial and error” and “scaling up.” “Obviously these terms were not in use in ancient times, but the application of their practical principles was made possible due to a basic understanding of engineering and common sense, which were seen in other places in the ancient world as well,” says Luria.

Luria explains that the “trial and error” method allowed the Arava metalworkers to slowly improve technological processes, as well as to increase the volume and quality of production. In addition, “scaling up” made it possible to increase the dimensions of the existing means of production using materials and processes that were common at the time, thereby developing advanced production equipment within a short amount of time and with minimum cost and technological risk.

“Shishak’s expedition was not intended to physically take over the copper mines in the Arava, but rather to formulate a long-term agreement with the Arava people in order to bolster local production and thus increase copper exports to Egypt, which was suffering from local production difficulties at the time,” Luria says.

“It appears that the secret of the success of the ancient copper industry in the Arava lies in the skills and abilities of efficient managers, who were assisted at every stage of their decision-making by talented technological experts. Archeology today can’t identify who these executives were, but a careful analysis of the deposits left in the area can tell us an accurate story. These findings are the residues of copper production that have accumulated as heaps of waste that can be dated, and whose size allows us to assess the volume of production at any given time. Moreover, by conducting a chemical analysis of the copper content remaining in the waste, we can determine the quality of the production; when the amount of copper in the waste diminishes, we can conclude
that the process had become more efficient.”