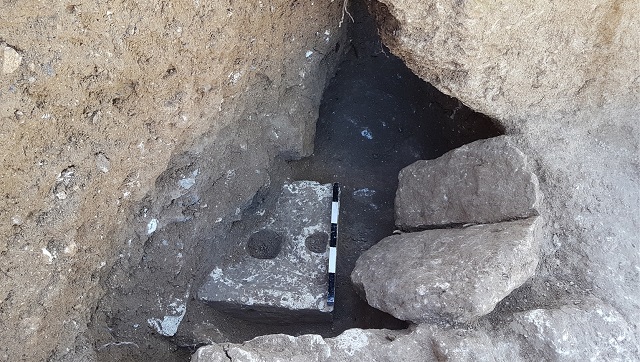 The stone toilet seat found during the 2019 excavation at Armon Hanatziv. Photo by Ya’akov Billig (IAA)

The wealthy of Jerusalem during the First Temple Period, long before the time of the Maccabees or the first exile of the Jews to Babylon, had the luxury of using their own toilets which were not available to the masses of the era. However, this did not protect them from a wide range of stomach parasites as a new study by Tel Aviv University and the Israel Antiquities Authority has uncovered.

The researchers were led by Dr. Dafna Langgut of Tel Aviv University’s Jacob M. Alkow Department of Archaeology and Ancient Near Eastern Cultures, director of the Laboratory of Archaeobotany and Ancient Environments at the Sonia & Marco Nadler Institute of Archaeology and the Steinhardt Museum of Natural History. They found the remains of 2,700-year-old intestinal worm eggs below the stone toilet in the garden of what they described as a “magnificent” private estate that was uncovered at the Armon Hanatziv Promenade in Jerusalem. The promenade is located just south of the Old City walls above a valley that separates it from the Temple Mount.

Today, everyone knows the importance of good hygiene and, washing one’s hands regularly, and making sure that food is cleaned and properly cooked before eating it. But until the modern era people did not know anything about germs and how they spread. They also did not know about all of the parasites that can live in different foods as well as water and that can then live in a person’s intestines.

The existence of the ancient toilet does not mean that the people who used it had an understanding of hygiene. It just shows that they could afford a private area to use instead of some sort of public outhouse, or just going in the woods.

And Langgut and Billig were not surprised by the recovery of a toilet in the estate’s prestigious garden. “Toilet facilities were extremely rare at that time and were a status symbol – a luxury facility that only the rich and high-ranking could afford. As the Talmud teaches, ‘Who is wealthy?… Rabbi Yosef says: Anyone who has a bathroom close to his table.’” (Babylonian Talmud, Tractate Shabbat 25: 2).

The researchers found egg remnants belonging to four different types of intestinal parasites: roundworm, tapeworm, whipworm, and pinworm. According to the researchers, the stone toilet seat was in the estate’s “restroom,” and the presence of the worms indicates that even the wealthy residents of Jerusalem at that time suffered from diseases and epidemics. The article was recently published in the International Journal of Paleopathology.

The study was Dr. Langgut collected sediment samples from underneath the stone toilet, where the cesspit was located. Next, in her laboratory, she chemically extracted the parasite eggs, scrutinized them under a light microscope, and identified them. The egg remains were discovered as part of a salvage excavation by the Israel Antiquities Authority, recently carried out at the Armon Hanatziv Promenade in Jerusalem, funded by the Ir David Foundation

“The findings of this study are among the earliest observed in Israel to date,” says Dr. Langgut. “These are durable eggs, and under the special conditions provided by the cesspit, they survived for nearly 2,700 years. Intestinal worms are parasites that cause symptoms like abdominal pain, nausea, diarrhea, and itching. Some of them are especially dangerous for children and can lead to malnutrition, developmental delays, nervous system damage, and, in extreme cases, even death.”

Dr. Langgut believes that intestinal disease at the time might have been due to poor sanitary conditions that caused fecal contamination of food and drinking water. Or, it might have been due to a lack of hygiene awareness, such as a failure to wash hands. Other possible sources of infection were the use of human feces to fertilize field crops and the consumption of improperly cooked beef or pork. In the absence of medicine, recovery from intestinal worms was difficult to impossible, and those infected could suffer from the parasites for the rest of their lives. Therefore, it is quite possible that the findings of the study indicate a bothersome and long-lasting infectious disease (comparable to lice and pinworms in the kindergartens of today) that affected the entire population. Langgut points out that these parasites still exist today, but the modern Western world has developed effective diagnostic means and medications, so they don’t turn into an epidemic.

Ya’akov Billig, the director of the excavation on behalf of the Israel Antiquities Authority, explains that the uncovered royal estate dates back to the mid-7th century BC (the late Iron Age). According to Billig, magnificent stone artifacts of extraordinary workmanship were found at the site, such as decorated stone capitals (in the Proto-Aeolian style) of a quantity and quality not yet observed in ancient Israel. Adjacent to the mansion was a spectacular garden with a breathtaking view of the City of David and the Temple Mount. It was here, along with the remains of fruit and ornamental trees, that the cesspit sampled by Langgut was found. It was capped by a square limestone installation with a hole in its center, identified as a toilet’s drop hole.

For Dr. Langgut, this was an opportunity to apply a field of research called archeoparasitology that she had begun to develop in her laboratory. In this field, researchers identify microscopic remains of intestinal worm eggs to learn about the history of diseases and epidemics. This area provides new information regarding human hygiene, lifestyle, and sanitary conditions.

According to Eli Escozido, director of the Israel Antiquities Authority, “The research conducted by the Israel Antiquities Authority and our partners manages to touch on the finest details of everyday life in antiquity; thanks to advanced equipment and fruitful collaboration with complementary research institutions, it is now possible to extract fascinating information from materials that we previously didn’t have the tools to handle scientifically. Today, archeological research is reaching remarkable achievements and leading to a better understanding of past lifeways – an understanding, it seems, that will only continue to evolve.”

Dr. Langgut concludes, “Studies like this one help us document the history of infectious diseases in our area and provide us with a window into the lives of people in ancient times.” Dr. Langgut is currently conducting additional analyses on the sediments collected from the cesspit in order to learn about the diet and medicinal herbs used in Jerusalem in the late Iron Age.