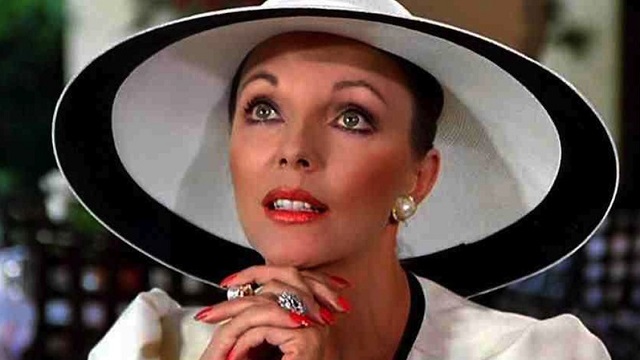 Joan Collins is now 88 years old and she has revealed some very tragic and personal information. The 1980s TV star has now joined the “Me Too” movement and come out and said that she was once raped by her first husband Maxwell Reed.

The former Dynasty star, whose father was Jewish, opened up about what happened in an interview with the BBC over the weekend. Joan Collins said that, before they were even married, Reed once spiked her drink with a drug and then raped her. Collins said that this happened when she was only 17 years old and Reed was then 31.

“He had an American accent which was quite odd for a man from South London, said Collins. “He was 31, and I was 17 and a virgin – I knew that would cause trouble at home.”
–

In fact, you’ll be seeing more of her in about 4 hours! #SaturdayNight #thisisjoancollins #bbctwo #bbc2 @bbcarts @BBCiPlayer @BBCTwo pic.twitter.com/3EMOMSiS9B

“The next thing I knew I was flat out on the sofa and he was raping me. In those days, my mother would have said I was taken advantage of,” Collins told the BBC. “Now, we call it date rape.”

Joan Collins married Maxwell Reed, she said, “out of shame.” But the abuse continued over the course of their four year marriage. Collins said that her husband “pimped” her out to other men, including a sheikh.

“We were in Les Ambassadeurs, a terribly chic nightclub in Mayfair,” she said. “Max had a habit of gravitating towards rich, elderly men, and I was starting to get a vague idea of what this was all about. Max told me, ‘He’ll pay you £10,000 for one night—and I can even watch.’ I looked at my handsome, loathsome husband and began to cry. ‘Never in a million years.’ I went home to Mummy.”

Joan Collins said that she was also once sexually assaulted by the famed Hollywood producer Darryl Zanuck. She said that he, “pinned me like a beetle to a board and said, ‘You need a real man, honey, a real man’. Luckily a make-up man came down the corridor and I was able to escape.”

“I survived being a young actress when practically all the men were predators,” explained Collins. “They used to say female stars were finished at 27, but here I am after seven decades in the business to tell you a thing or two about how to survive the perils of the profession.”