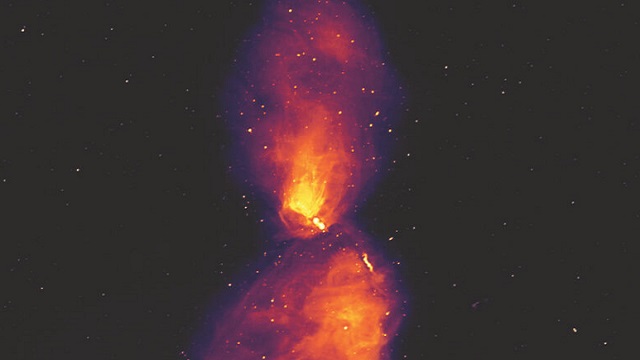 Centaurus A is a giant elliptical active galaxy 12 million light-years away. At its heart lies a black hole with a mass of 55 million suns. ICRAR/Curtin and Connor Matherne, Louisiana State University.

A group of Australian astronomers from the International Centre for Radio Astronomy Research ICRAR have provided what is said to be the most comprehensive image of radio emission from the nearest actively feeding supermassive black hole to Earth. The emission is powered by a central black hole in the galaxy Centaurus A, about 12 million light years away.

Don’t worry! Earth is in no danger of being swallowed up by this black hole. Even on Star Trek other galaxies are too far away for people to travel to.

A black hole is defined as a region of space-time where gravity is so strong that nothing can escape it, not even light. The theory of general relativity predicts that a sufficiently compact mass can deform space-time to form a black hole. The boundary of no escape is called the event horizon. While there are many theories as to how a black hole forms and what exactly is inside of one, to date we have no definitive proof as to what it actually is.

The cientists explain that this black hole feeds on in-falling gas and ejects material at near light-speed, causing ‘radio bubbles’ to grow over hundreds of millions of years. When viewed from Earth, the eruption from Centaurus A now extends eight degrees across the sky—the length of 16 full Moons laid side by side.

The images of the black hole were taken using the Murchison Widefield Array (MWA) telescope in outback Western Australia. 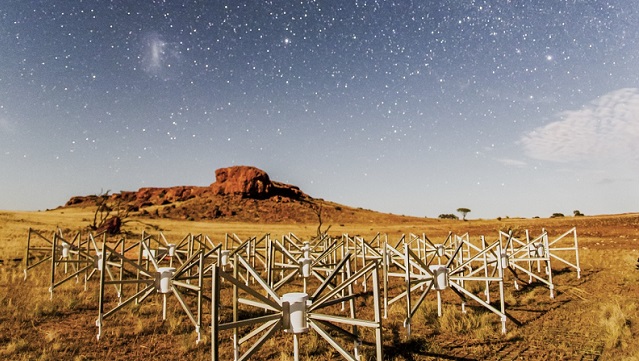 Tile 107, or “the Outlier” as it is known, is one of 256 tiles of the MWA located 1.5km from the core of the telescope. The MWA is a precursor instrument to the SKA. Photographed by Pete Wheeler, ICRAR

Lead author of the study Dr Benjamin McKinley, from the Curtin University node of the International Centre for Radio Astronomy Research (ICRAR), said the image reveals spectacular new details of the radio emission from the galaxy.

“These radio waves come from material being sucked into the supermassive black hole in the middle of the galaxy,” he said. “It forms a disc around the black hole, and as the matter gets ripped apart going close to the black hole, powerful jets form on either side of the disc, ejecting most of the material back out into space, to distances of probably more than a million light years.”

“Previous radio observations could not handle the extreme brightness of the jets and details of the larger area surrounding the galaxy were distorted, but our new image overcomes these limitations,” he added.