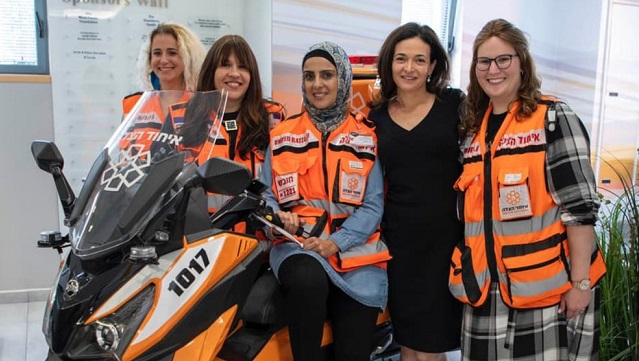 Facebook exec turned Meta COO Sheryl Sandberg made a $5 million donation to United Hatzalah. The donation was made at a Miami fundraiser held by Friends of United Hatzalah of Israel which brought in a total of $18 million to the organization. The funds will be used for United Hatzalah’s women’s unit in Israel, which has been renamed the Adele and Dr. Joel Sandberg Women’s Unit, in honor of her parents.

The event was chaired by Tila Falic Levi and the organization honored Adele and Dr. Joel Sandberg and Dr. Ari Ciment.
–

Sandberg visited United Hatzalah’s Jerusalem offices in 2019. At the time she said, “United Hatzalah’s work to quickly respond to emergencies and save lives is one of the most impressive programs I’ve ever seen. I’m in awe of these brave women and all of the United Hatzalah volunteers, who race toward people when they need help most.”

During the visit, the Sandberg family met with members of United Hatzalah’s diverse women’s unit and its founder, Gitty Beer. The women’s unit sends female EMTs to treat other women in an effort to make patients feel more comfortable, particularly when dealing with sensitive or private issues such as childbirth or miscarriage.

United Hatzalah of Israel is the largest independent, non-profit, fully volunteer Emergency Medical Service organization that provides the fastest and free emergency medical first response throughout Israel. United Hatzalah’s service is available to all people regardless of race, religion, or national origin. United Hatzalah has more than 6,000 volunteers around the country, available around the clock – 24 hours a day, 7 days a week, 365 days a year. With the help of its unique GPS technology and iconic ambucycles, their average response time is less than 3 minutes across the country and 90 seconds in metropolitan areas. Its mission is to arrive at the scene of medical emergencies as soon as possible and provide the patient with professional and appropriate medical aid until an ambulance arrives, resulting in many more lives saved.