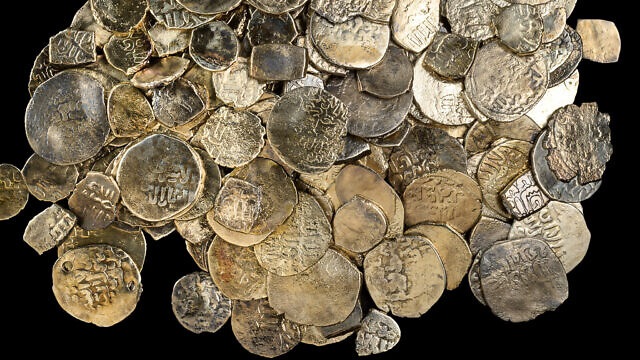 coins from the Mamluk period recently discovered in a shipwreck off the coast of Caesarea. (photo by Dafna Gazit Israel Antiquities Authority)

Roman Era coins were discovered by The Israel Antiquities Authority Marine Archaeology Unit in a survey that was conducted off of the coast of Caesarea. They were among treasures found in two ancient shipwrecks. The find included hundreds of silver and bronze coins from the mid-third century, some figurines, and a gold ring engraved with the figure of the Good Shepherd, a well-known symbol of Jesus in early Christian art.

There was also a gemstone believed to have once been set inside a ring. It has a carved image of a lyre, known in the Jewish tradition as “David’s Harp” and in Greek mythology as “Apollo’s Lyre.”
–

Israel continues to uncover riches all along its coastline. In October, an Israeli scuba diver found a 900-Year-Old Crusader Sword on the coast of the Mediterranean Sea. The three foot long sword was found along with some pottery fragments, and was turned over to the Israel Antiquities Authority.

This time, artifacts were found dating back to two different eras. One of the two ships comes from the Roman era, about 1,700 years ago. The second is from the Mamluk era, which was about 600 years ago. The Mamluks were slave soldiers who rebelled, established their own dynasty in Egypt and at one time controlled Israel.

The ships were discovered at a depth of about 4 meters.

“The ships were probably anchored nearby and were wrecked by a storm,” said Jacob Sharvit and Dror Planer of the IAA’s Marine Archaeology Unit. “They may have been anchored offshore after getting into difficulty, or fearing stormy weather, because sailors know well that mooring in shallow, open water outside of a port is dangerous and prone to disaster.”