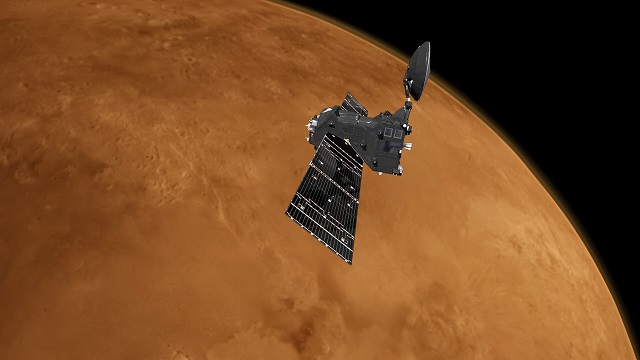 The European Space Agency’s (ESA) Roscosmos ExoMars Trace Gas Orbiter discovered what the agency calls significant amounts of water at the heart of Mars’ dramatic canyon system, Valles Marineris. The water, which is hidden beneath Mars’ surface, was found by the Trace Gas Orbiter (TGO)’s FREND instrument, which is mapping the hydrogen – a measure of water content – in the uppermost metre of Mars’ soil.

The discovery of water on Mars is the biggest discovery made in centuries. If there is water on Mars then that would make it all the more possible for people to live there someday. It also means that it is more likely that there could be life there and also opens up the possibility that there could be water and a chance to sustain human life on other planets on other solar systems.

NASA explains that Valles Marineris, or Mariner Valley, is a vast canyon system that runs along the Martian equator just east of the Tharsis region. Valles Marineris is 4000 km (2500 mi) long and reaches depths of up to 7 km (4 mi)! For comparison, the Grand Canyon in Arizona is about 800 km (500 mi) long and 1.6 km (1 mi) deep. In fact, the extent of Valles Marineris is as long as the United States and it spans about 20 percent (1/5) of the entire distance around Mars! The canyon extends from the Noctis Labyrinthus region in the west to the chaotic terrain in the east. Most researchers agree that Valles Marineris is a large tectonic “crack” in the Martian crust, forming as the planet cooled, affected by the rising crust in the Tharsis region to the west, and subsequently widened by erosional forces.

Launched in 2016, The ExoMars program comprises two missions: the first – the Trace Gas Orbiter – launched in 2016 while the second, comprising a rover and surface platform, is planned for 2022. Together they will address the question of whether life has ever existed on Mars.
–

The ESA/Roscosmos #ExoMars @ESA_TGO has spotted significant amounts of water, hidden beneath the surface, in the dramatic canyon system of Valles Marineris on #Mars 👉 https://t.co/0MvB0XN144 #ExploreFarther pic.twitter.com/T2mlvJxbrs

ESA explains that while water is known to exist on Mars, most is found in the planet’s cold polar regions as ice. Water ice is not found exposed at the surface near the equator, as temperatures here are not cold enough for exposed water ice to be stable.

Missions including ESA’s Mars Express have hunted for near-surface water – as ice covering dust grains in the soil, or locked up in minerals – at lower latitudes of Mars, and found small amounts. However, such studies have only explored the very surface of the planet; deeper water stores could exist, covered by dust.

“With TGO we can look down to one metre below this dusty layer and see what’s really going on below Mars’ surface – and, crucially, locate water-rich ‘oases’ that couldn’t be detected with previous instruments,” says Igor Mitrofanov of the Space Research Institute of the Russian Academy of Sciences in Moscow, Russia; lead author of the new study; and principal investigator of the FREND (Fine Resolution Epithermal Neutron Detector) neutron telescope.