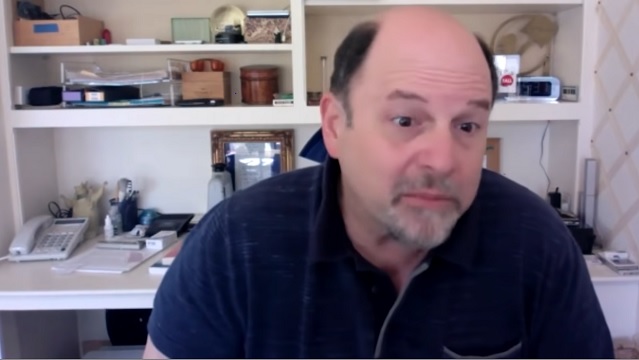 Jason Alexander Inside of You podcast

Jason Alexander will soon be directing plays. He will direct a play based on the movie “The War of the Roses” as well as “The Cottage,” a comedy by up-and-coming playwright Sandy Rustin.

Before he got the part on Seinfeld, Jason Alexander, now 62, was known as that guy who played the mean lawyer who worked for Richard Gere in “Pretty Woman.” Alexander was reviled the world over for being the guy who tried to rape America’s sweetheart Julia Roberts.
–

But before any of that, Jason Alexander preferred being on the stage and was a Broadway star. He talked about his Broadway experiences on the podcast.

Doing a play is so much different than a television show. On TV, the actors spend a week learning the script, rehearsing and then filming. But while they play the same characters week in and week out, they at least get to do completely new things with each episode.

This is not the case with the stage. There actors play the same character, say the same lines, and do the same story day in and day out.
–

The interview was not enough about this fantastic game. If you live theater music, listen in and enjoy and play along. https://t.co/haLUCtG7Oz

Jason Alexander explained that this creates sort of a brotherhood among stage actors. “There is something about the brotherhood and sisterhood of people who know what it means and know what it takes to get up eight times a week and do something that has no safety net for an audience, where you have to make that magic trick work, or it fails,” he said. “And it’s not just the actors, it’s the whole machinery of those shows, its cast and crew and creators.”

And Alexander would never give it up. Nor would he have turned down the opportunity to do the podcast. “You’d have to kind of beat me away with sticks to keep me from it. I wanted to say to Todd when he called and told me about it … ‘You stole my idea.’ I was two weeks away from having that idea.”