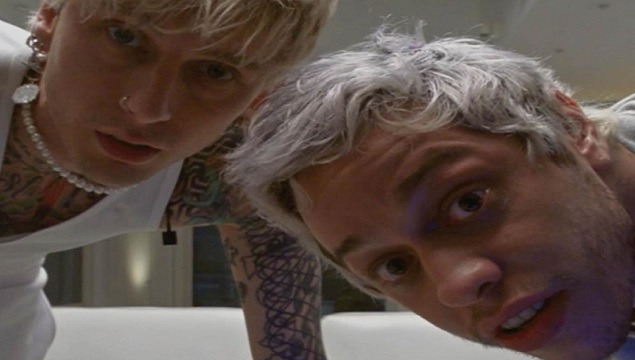 Pete Davidson, the biggest star today on Saturday Night Live, is stripping down to his underwear in a new ad campaign for Calvin Klein. He is joined in the new Calvin Klein advertising by Machine Gun Kelly.

Davidson, 28, whose father had Jewish heritage, is America’s hottest hunk these days. He is currently dating the recently divorced Kim Kardashian. Pete Davidson hit it off with the 40 year old reality star best known for her big butt when she recently hosted Saturday Night Live.

And these days, Davidson seems to be America’s new Leonardo DiCaprio. The Oscar winning DiCaprio, since he broke out as a star almost 25 years ago in the movie Titanic, has been known as Hollywood’s biggest lover, jumping from super model to super model. The list of DiCaprio girls is longer than that of Bond girls, from Nina Agdal to Miranda Kerr, from Blake Lively to Gisele Bündchen and even the Israeli model Bar Refaeli.
–

But he is almost 50 now and 20 years older than Pete Davidson.

Davidson, for his part, is on his way to surpassing DiCaprio in the number of famous women dated. He at one point dated a woman old enough to be his mother, British actress Kate Beckinsale. But looking at Kate Beckinsale these days, people understood the attraction there.

Pete Davidson also once had a serious relationship with thee singer Ariana Grande. And he also dated actress Margaret Qualley and the model Kaia Gerber, among others. So, it is no wonder that Calvin Klein would want him to be its new underwear model.
–

We see you Laurena. #mycalvins

One more advantage of showing off Davidson in his underpants are all of those tattoos. The actor is known for them.