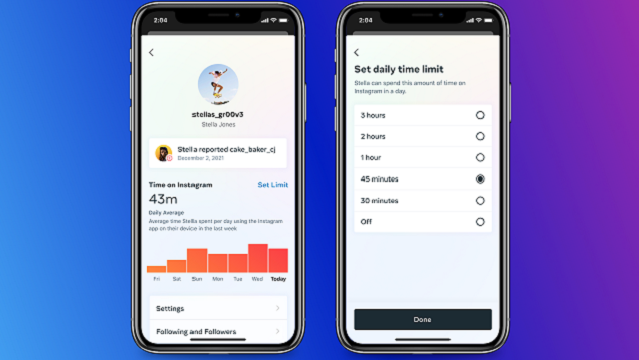 Instagram has added a new safety feature called “Take a Break.” The new measure from the Facebook owned social media platform, which was added in the US, UK, Canada and Australia on Tuesday, tells users that it may be time to take a break if they have been using Instagram for too long.

The idea here is to deal with one of the many criticisms that Instagram and its parent company Facebook have been acing. The social media services make their money through targeted advertising. The longer a user uses a service, the more adds that he will see. So, it is in the company’s interest – now called Meta – to keep people logged in and scrolling through their feeds for as much time as possible.

This is one of the marketing “breakthroughs” that Facebook made early on. Its people realized that by adding the scroll feature they could keep users engaged for longer periods of time. On smart phones and tablets, people have gotten used to simply scrolling through their feeds. Every website now works this way, with the newest feed coming at the top of the list. And scrolling, it was found, can be addictive.

“To you I may look otherworldly, but to me that’s another day in the life of Elle: being the best me I can be at any time.” —21-year-old professional piercer Ellehttps://t.co/kS9F4oJkk9 pic.twitter.com/X3Y1XF6NcQ

So the new move by Meta is probably just as much a public relations move as it is a practical one, or an altruistic one.

He also said that Instagram will add a new educational hub for parents and guardians.

“Parents and guardians know what’s best for their teens, so we plan to launch our first tools in March to help them guide and support their teens on Instagram,” said Mosseri. “Parents and guardians will be able to view how much time their teens spend on Instagram and set time limits. We’ll also give teens a new option to notify their parents if they report someone, giving their parents the opportunity to talk about it with them. This is the first version of these tools; we’ll continue to add more options over time.”

Critics might say that this is another example of “too little too late.” What is clear for now, however, is that neither Facebook not Instagram seems to be losing any of its users over the recent scandals. But Meta also faces the strong possibility of new government oversight over its activities in both the U.S. and the E.U.