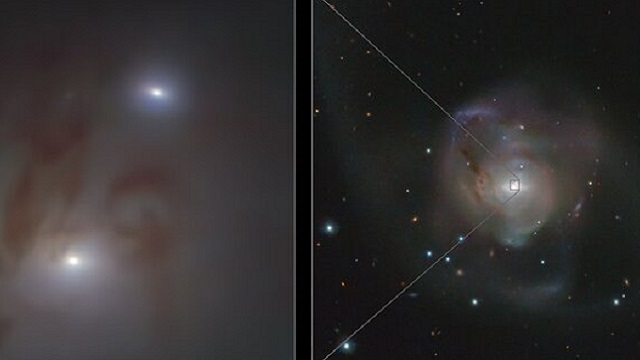 A pair of black holes out there in space are merging together to form one massive black hole. What is more, this is the closest to Earth that such a phenomenon has been observed, albeit in another galaxy.

The European Southern Observatory discovered the phenomenon. There is no need for panic because the new massive black hole will be trillions and trillions of miles away from Earth.
–

“The small separation and velocity of the two black holes indicate that they will merge into one monster black hole, probably within the next 250 million years,” adds co-author Holger Baumgardt, a professor at the University of Queensland, Australia. The merging of black holes like these could explain how the most massive black holes in the Universe come to be.

So, what does this mean for all of us here on Earth? Well, nothing really. By the time the merger of the two black holes is completed everyone alive today will have been long gone. And there is little, if any, chance that a human being will actually be able to travel to anywhere near there in the next few thousand years or so.

But what is important here is how we are learning so much more about the nature of the universe on a daily basis.
–

Always a pleasure when someone who has been to space shares our discoveries ???? https://t.co/WPyDd6d5mp

The European Southern Observatory (ESO) enables scientists worldwide to discover the secrets of the Universe for the benefit of all. We design, build and operate world-class observatories on the ground — which astronomers use to tackle exciting questions and spread the fascination of astronomy — and promote international collaboration in astronomy. Established as an intergovernmental organization in 1962, today ESO is supported by 16 Member States (Austria, Belgium, the Czech Republic, Denmark, France, Finland, Germany, Ireland, Italy, the Netherlands, Poland, Portugal, Spain, Sweden, Switzerland and the United Kingdom), along with the host state of Chile and with Australia as a Strategic Partner.