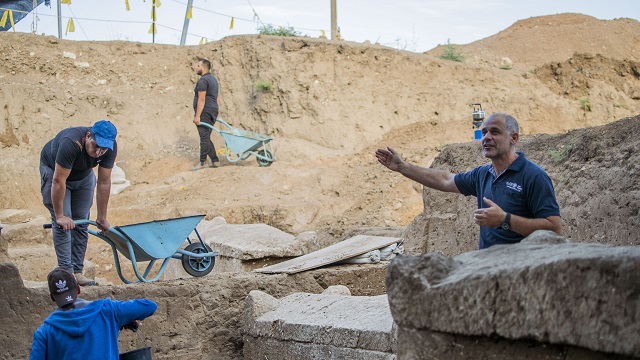 Israel Antiquities Authority excavations being carried out on a massive scale in Yavne have uncovered the first evidence there of a building from the time of the Sanhedrin—the supreme legislative Jewish assembly that went into exile in Yavne after the fall of Jerusalem, some 2,000 years ago.

The building contained fragments of chalkstone vessels, clear evidence of a Jewish presence. The excavation also discovered an impressive cemetery dating from the time of the Sanhedrin The current excavation was prompted by development work on the city’s expansion, initiated by the Israel Land Authority in cooperation with Yavne municipality.

Israel Antiquities Authority excavations in Yavne are revealing evidence of the life—and death—of Yavne’s inhabitants at the time of the Sanhedrin, in the late first and second centuries CE; for the first time ever, the excavation has discovered remains of a building dating from the time of the Sanhedrin that contains chalk stone cups, clear evidence that its occupants were observing Jewish laws of ritual purity. The excavation, prompted by work on the city’s expansion initiated by the Israel Land Authority in cooperation with Yavne municipality, also uncovered a large cemetery dating from the same period. The excavation area is located close to a massive Byzantine wine-production center unearthed in recent excavations. During this week’s festival of Hanukkah, as part of Israel Heritage Week, the public is invited to register for tours of the excavation.

“The discovery of finds from the time of the Sanhedrin is very exciting,” say Pablo Betzer and Dr. Daniel Varga, directors of the Yavne excavation for the Israel Antiquities Authority. “This is a direct voice from the past, from the period when the Jewish leadership salvaged the remaining fragments from the fall of the Temple, went into exile in Yavne, and set about re-establishing the Jewish people there.”
–

For the first time ever in Yavne, the excavations discovered an industrial building dating from the first–third centuries CE. The floor contained several fragments of stoneware known as ‘measuring cups’, vessels that retain their ritual purity and are identified with the Jewish population in the late Second Temple period and second century CE.

An impressive cemetery was discovered only 70 meters away from the building. “We encountered dozens of carefully arranged tombs spaced out at set distances, which probably indicates the existence of a ‘burial society’—some official body that was responsible for burial,” say Betzer and Dr. Varga. “There are different types of tombs: some are coffins (sarcophagi), which are made mostly of stone with one lead coffin.” The excavation directors add that “based on the cemetery’s location, it was probably established outside the boundaries of the city, in accordance with Jewish and Roman law. Were the interred individuals Jews, or pagans? It is too early to say, since there are no ethnic symbols on the coffins. With all due caution, the historical records and archaeological finds raise the possibility that these are the tombs of the city’s Jewish community. If this hypothesis is correct, then at least some of the tombs, perhaps the most elaborate, may belong to the sages of Yavne, contemporaries of Rabban Yohanan ben Zakkai, Rabbi Akiva and Rabban Gamliel.”

The excavation uncovered another surprising find: over 150 glass phials placed on top of the tombs. According to Dr. Yael Gorin-Rosen, head of the Israel Antiquities Authority’s glass department, “The phials were probably used to keep precious liquids such as fragrant oils. About half of them were locally produced and the other half were imported from Alexandria in Egypt. Phials of this type have been recovered in excavations at both Jewish and pagan burial sites from the first to the early third centuries CE. It is a mystery why the phials were placed outside the tombs in Yavne and not inside them, as was usual.”

In antiquity, Yavne was one of the most important towns in the southern coastal plain. During the Hasmonean period, it held a vital role in the struggle between the Maccabean forces and Seleucid (Greek) rule, and the town is mentioned multiple times in the writings of Josephus. 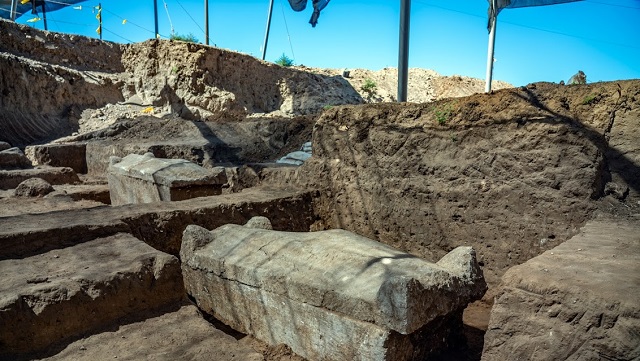 Tombs from the time of the Sanhedrin in Yavne. photo by (Yaniv Berman Israel Antiquities Authority)

Toward the end of the Second Temple period, Yavne’s mixed population had a majority of Jewish residents. According to The Literature of the Sages, before the destruction of the Second Temple, Rabban Yohanan ben Zakkai fled from the besieged city of Jerusalem and persuaded the Roman emperor Vespasian to allow him to reconstitute the Sanhedrin in Yavne. It was then that Rabban ben Zakkai uttered the famous statement: “Give me Yavne and its sages.”

In the intervening years between the Great Revolt and the Bar Kokhba Revolt, Yavne became the most important Jewish spiritual center in the country. It was in Yavne that Rabban Yohanan ben Zakkai, later followed by Rabban Gamliel, led the Sanhedrin and the patriarchate (nesiut), restored the Torah to the Land of Israel and established laws in keeping with the new reality, without the Temple. It can be said that the foundations of Judaism as we know it today were laid in Yavne.

According to Eli Eskozido, director of the Israel Antiquities Authority, “It is exciting to see ancient accounts of the Sanhedrin translated into actual evidence in the field, with vessels, installations and buildings. Together with the project’s initiators at the Israel Land Authority and Yavne municipality, the Israel Antiquities Authority is examining the possibility of preserving some of these finds and presenting them to the general public. The recent finds join those of the massive wine-production industry from the Byzantine period, already slated for conservation and public viewing. The Israel Antiquities Authority is continuing its excavations, and we are sure that Yavne has not yet had the last say. Wherever archaeologists scrape the surface here, they encounter a find of national importance, with all that that entails.”