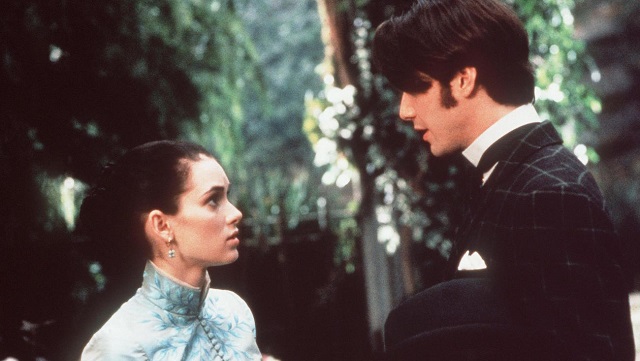 Keanu Reeves starred opposite Winona Ryder and Oscar winner Gary Oldman in the 1992 movie Dracula. Now, Keanu Reeves is telling people that he and Winona Ryder got married while making the movie, well, at least in the eyes of God anyway.

In the Francis Ford Coppola version of the Dracula story Gary Oldman played the title role. Keanu Reeves played the young hero and Winona Ryder was his romantic opposite who becomes the object of Dracula’s lust and in danger of being turned by him into a vampire.

As often happens when filming romantic storylines in movies, the two actors began a romantic relationship in real life. And why not? They were both young and single at the time and, even in the days before the Internet, the buzz around such a Hollywood romance was always good for an actor’s career and the ticket sales of his latest movie. And even plenty of married actors have had romances with their co-stars in movies too.
–

And Winona Ryder, born Winona Laura Horowitz, has had plenty of famous boyfriends over her more than 30 years as a star. She dated Rob Lowe, Christian Slater and Johnny Depp, all of whom she made movies with in the early years of her career.

Johnny Depp was said to have really had his heart broken by Ryder. And earlier this year, Ryder said that Depp was one of the most “significant relationships” of her life.” When Depp was accused by his ex-wife Amber heard of assault Ryder said in his defense that Depp was an “incredibly loving guy” who was “very, very protective” of her.

Over the years, Winona Ryder has been linked romantically to a plethora of Hollywood stars from Matt Damon to even David Duchovny. And while she was said to be engaged a few times, Ryder has never married.
–

So, what about Keanu Reeves?

Well, the actor said that the two were married on screen for the movie. “We did a whole take of a marriage ceremony with real priests,” Reeves told Esquire in an interview.

But does that count when there was no intent to marry and there certainly were no marriage licenses issued?

“Winona says we are [married. Coppola says we are. So I guess we’re married under the eyes of God,” said Reeves.

Well, if that is the case, and Depp believes it, does this not

Winona Ryder was actually the first one to revel this fact. In 2018, she told Entertainment Weekly that the two actors actually got married for real in a Greek Orthodox Church in Los Angeles.

In 2018 Francis Ford Coppola told the Guardian that he also thought it was a real wedding. “This is pretty authentic and I think very beautiful,” he said, “because we actually did the ceremony and had the priest do the ceremony. So in a sense, when we were all done, we realized that Keanu and Winona really are married as a result of this scene and this ceremony.”

So, if it is a real marriage, at least neither actor has since married anybody else and so neither can be accused of bigamy. Perhaps, that is the reason neither of them ever got married.

Winona Ryder went on to make three more films together: A Scanner Darkly in 2006, The Private Lives of Pippa Lee in 2009 and Destination Wedding in 2018. But neither of the actors acted married when they performed together those times.