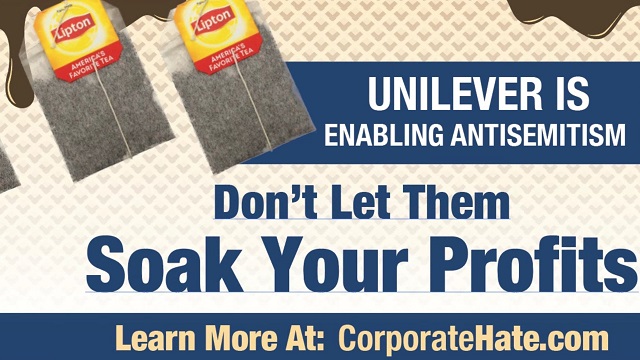 Ben & Jerry’s is still reeling from its poorly considered decision to join the boycott of Israel. Since it did so last summer, Ben & Jerry’s parent company Unilever has seen a huge political and social backlash that is costing it money as American states like New York, New Jersey and Florida have all divested their state pension plans from the company. And now an organization that supports Israel against haters and people who spread lies about the country called StandWithUs has taken the anti-Unilever campaign to a new level, spreading signs condemning Ben & Jerry’s.

Since the Israeli company refused to implement the ban, Ben & Jerry’s parent company Unilever said that it would not renew their contract when it ends.
–

A few weeks ago New York’s state pension fund on announced that it would divest its holdings in Unilever Plc, $111 million, the parent company of Ben & Jerry’s ice cream. The move came in response to Unilever’s joining the boycott movement against Israel.

The state of New Jersey has also moved to divest itself of its $50 million invested in the company.

Unilever just so happens to have headquarters located in Englewood Cliffs, New Jersey. And it is there that StandWithUs has posted billboards that say things like “Don’t Let Ben & Jerry’s Melt Your Profits,” and “Don’t Let Antisemitism Melt Your Brand.”

StandWithUs said in a press release, “Unilever’s actions empower extremists who oppose Israel’s existence, and despite multiple requests to reverse course, the company has refused to do so.” 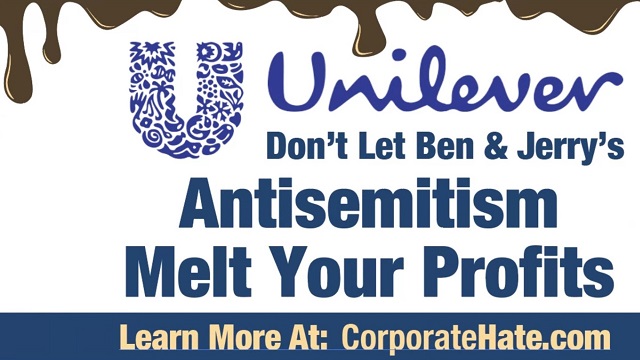 “Corporations hold immense power to shape public opinion and cultural norms, and it is crucial to hold them accountable when they promote or enable antisemitism,” said Roz Rothstein, CEO of StandWithUs.

“This campaign against corporate antisemitism will begin with Unilever and ensure their consumer brands across industries bear a reputational and financial cost for its discriminatory actions,” she said.