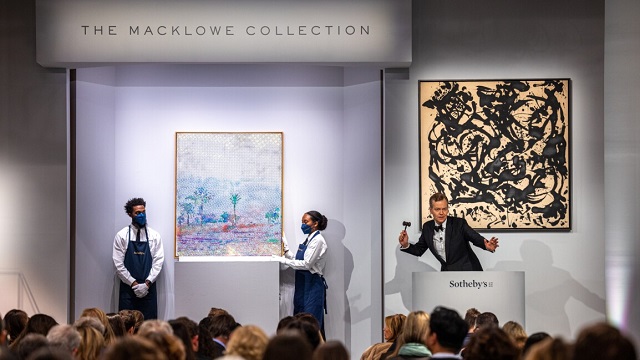 Billionaire Harry Macklowe is in the middle of a divorce from estranged wife Linda. As in every divorce, the couple has fought over the division of assets and who gets what when it comes to specific beloved items. So what should such a couple do when they can’t come to an agreement over the division of the family art collection?

Well, you take a cue from King Solomon, of course, and split the baby in half. In this case Harry Macklowe and his wife chose to sell off the artwork at auction and split the proceeds. Sotheby’s sold it all for them and brought the couple $676 Million.

The couple began their divorce three years ago.

Brooke Lampley, a Sotheby’s executive, described the lot for sale to the New York Times as “the most valuable single-owner auction ever staged.”

Eugenio López Alonso, a noted art collector and heir to a fruit juice fortune told the Times as he was leaving the sale, “It’s a strong market. Top quality always sells.”

And “top quality” certainly sells well to the idle rich and people with tons of spare cash to spend that they did not earn and merely inherited. Some cynics would say that such art is not really worth that much, but its prices get inflated because of how the wealthy use it to show off just how much they are worth.

This week the first group of paintings went on sale. This included 35 works of art, including pieces by Pablo Picasso, Andy Warhol and Cy Twombly. A work by abstract painter Mark Rothko sold for $82.5 million. A painting by Jackson Pollock called “Number 17, 1951” sold for over $61 million. This set a new record for the sale price of a Jackson Pollock.

Other really famous works sold included Alberto Giacometti’s craggy 1964 sculpture “Le Nez” (“The Nose”), which sold for $78.4 million. The piece was only estimated to go for $70 million, so we see how auctions help to jack up prices. Mark Rothko’s painting “No. 7,” from 1951, sold for $82.5 million and went to an anonymous Bidder from Asia. It was the second-highest auction price for a work by this Abstract Expressionist artist and topped its $70 million estimated price, again showing why its good to sell stuff at auction.