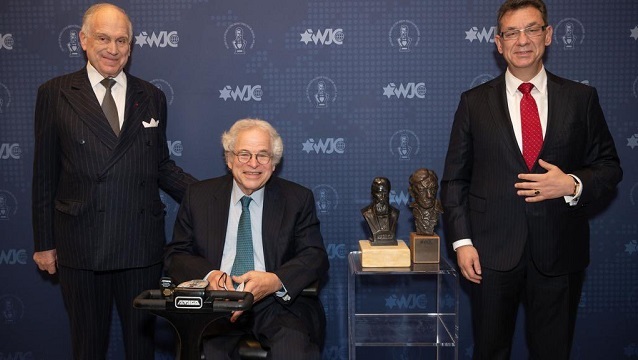 Mr. Lauder also spoke out against anti-Israel sentiment when he presented the WJC’s Theodor Herzl Award to Dr. Albert Bourla, chairman and CEO of Pfizer, for leading the innovation that resulted in a life-saving vaccine during an unprecedented pandemic.

The 77 year old cosmetics magnate will give seven figure to public education in New York.

According to the NY Post, Lauder said of New York City’s new mayor, “I trust Eric Adams completely.” Lauder said that he met with Adams recently at Lauder’s Manhattan home. “[But] I think that when he [Adams] gets in, there’s going to be a lot of pressure on him to get rid of it, because there are many, many interests that are not necessarily about the future of gifted and talented schools and more about what is … political.”

On outgoing Mayor Bill De Blasio’s record on education, he said “De Blasio could not have been a worse mayor for education and we fought him and we won on specialized schools but it wasn’t easy.”
–

awarding WJC’s top honor,the Theodor Herzl Award,to @AlbertBourla .
The past 20 months has been without question the strangest time in our lives.The entire world just stopped. In an unbelievably short time, vaccines went to trial and were produced.@Pfizer was at the forefront. pic.twitter.com/avL79Hechn

When presenting the WJC’s Herzl award, Lauder spoke about how Arab countries have been working to undermine Israel in more subtle ways after failing to ever defeat it on the battlefield. He said that they have, “quietly donated large sums of money to our best universities, under the guise of creating Middle East studies departments. They brought in anti-Israel professors and this has had a huge impact. While few were paying attention, these departments have successfully turned colleges, which were once honest in their teaching, into anti-Israel propaganda arenas. Young people have turned against Israel. The media has turned against Israel. You can see it all over the internet.”

Such anti-Israel sentiments, Lauder continued, have “even filtered down to voters, who have elected representatives in the United States Congress who have raised some of the most disgusting blood libels, anti-Semitic canards and pro-BDS support, without any shame whatsoever. Even worse, their party leaders refuse or are too afraid to condemn them. There are 37 Jewish members of Congress, where are they? Don’t you think we should hear more from them?”

Ronald S. Lauder has served as president of the World Jewish Congress since 2007. An international philanthropist, investor, art collector, and former public servant, Lauder also demonstrates his deep commitment to his Judaism through a wide range of other philanthropic endeavors that reach around the world.

As president of the WJC, Ambassador Lauder meets regularly with heads of state, prime ministers and government representatives to discuss and advance causes of concern to Jews and Jewish communities internationally. He advocates for the importance of supporting Israel, especially in times when the State or its citizens are under attack, and he encourages and aids the development of vibrant Jewish communities around the world.

Ambassador Lauder also serves as Chairman of the Auschwitz-Birkenau Memorial Foundation, which supports the preservation of the authentic remains of the former German Nazi concentration and extermination camp. In January 2020, the foundation brought a delegation of more than 100 Auschwitz-Birkenau Survivors and their families to the memorial site to participate in the commemoration of the 75th anniversary of the liberation of the camp.