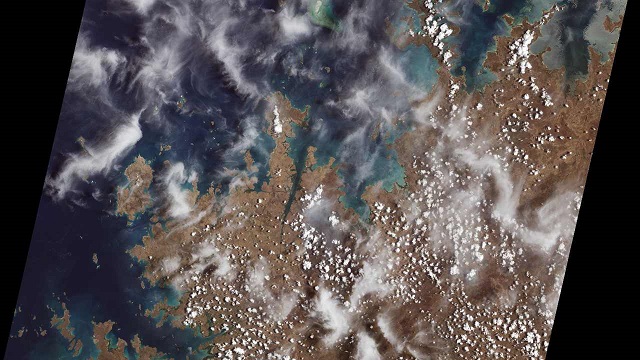 Mangroves are prominent along the northwest coast of Australia. The first image collected by Landsat 9, on Oct. 31, 2021 NASA

NASA has released the first satellite imagery taken of the Earth from its Landsat 9 satellite. The images, all acquired Oct. 31, are available online. NASA explains that these pictures provide a preview of how the mission will help people manage vital natural resources and understand the impacts of climate change, adding to Landsat’s unparalleled data record that spans nearly 50 years of space-based Earth observation.

Landsat 9 is the latest satellite in the Landsat series—it will continue Landsat’s irreplaceable record of Earth’s land surface upon its September 2021 launch. To reduce the build time and a risk of a gap in observations, Landsat 9 largely replicates its predecessor Landsat 8. 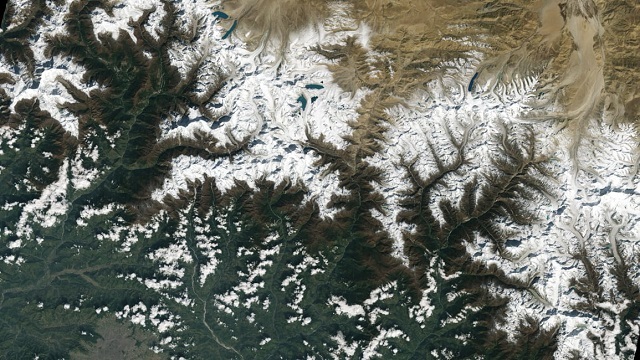 Kathmandu, Nepal, as seen at the bottom of the image, south of Himalayas NASA Landsat 9

Launched on 27 September, NASA says that Landsat 9 will extend the agency’s ability to measure changes on the global land surface at a scale where it can separate human and natural causes of change. When land use and resource availability issues arise, Landsat 9 will help decision makers make informed management decisions.

Landsat 9, adds NASA, will thus contribute a critical component to the international strategy for monitoring the health and state of the Earth. Landsat users can now take advantage of more frequent observations (every 8 days using two satellites).

“Landsat 9’s first images capture critical observations about our changing planet and will advance this joint mission of NASA and the U.S. Geological Survey that provides critical data about Earth’s landscapes and coastlines seen from space,” said NASA Administrator Bill Nelson. “This program has the proven power to not only improve lives but also save lives. NASA will continue to work with USGS to strengthen and improve accessibility to Landsat data so decision makers in America – and around the world – better understand the devastation of the climate crisis, manage agricultural practices, preserve precious resources and respond more effectively to natural disasters.” 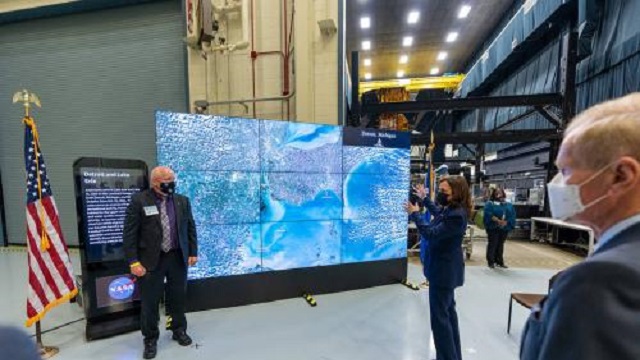 Landsat 9 is similar in design to its predecessor, Landsat 8, which was launched in 2013 and remains in orbit, but features several improvements. The new satellite transmits data with higher radiometric resolution back down to Earth, allowing it to detect more subtle differences, especially over darker areas like water or dense forests. For example, Landsat 9 can differentiate more than 16,000 shades of a given wavelength color; Landsat 7, the satellite being replaced, detects only 256 shades. This increased sensitivity will allow Landsat users to see much more subtle changes than ever before. 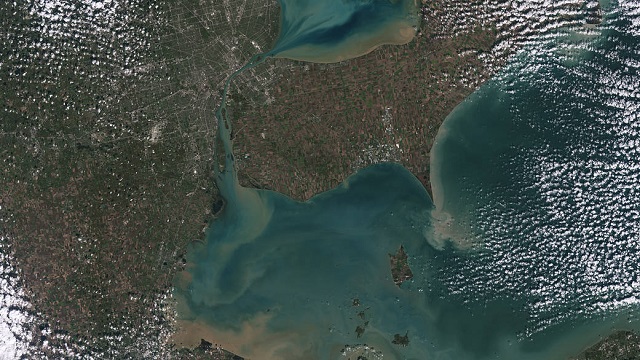 Sediments swirl in Lake Erie and Lake St. Clair in this Landsat 9 image of both Detroit, Michigan, and Windsor, Ontario, from Oct. 31, 2021. The Great Lakes serve as sources of freshwater, recreational activity, transport, and habitat for the upper-midwestern US, and water quality remains a high priority.

“First light is a big milestone for Landsat users – it’s the first chance to really see the kind of quality that Landsat 9 provides. And they look fantastic,” said Jeff Masek NASA’s Landsat 9 project scientist at Goddard Space Flight Center. “When we have Landsat 9 operating in coordination with Landsat 8, it’s going to be this wealth of data, allowing us to monitor changes to our home planet every eight days.