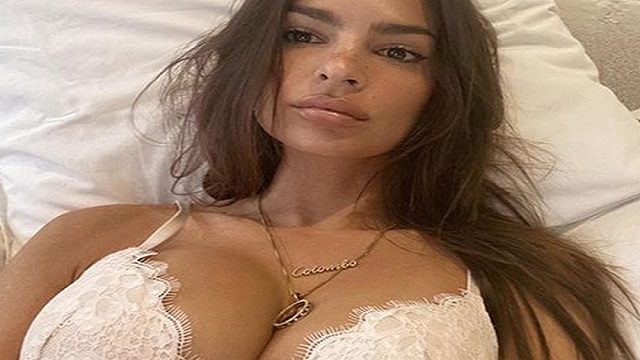 The difference between these two women, both Jewish, could not be clearer: Emily Ratajkowski is only famous because she was born with good looks and exploited that fact to make a lot of money showing herself half naked all over social media, while Annie Leibovitz proved herself as a professional.

(Take note of whose picture we used above.)
–

Annie Leibovitz made her mark in this world as a photographer, in a world dominated by men. When she started out, women photographers were almost unheard of. But she persevered and made it. And Leibovitz was able to do so while avoiding the fast track to fame and fortune, the world of fashion photography.

Emily Ratajkowski has no real skills, has not done anything groundbreaking, has not put forward the cause of feminism in any way, and has shown that other than her looks, she has no real talent. For example, in the few movies that she has been in, Ratajkowski has shown that she cannot act. Her most famous role was getting naked in a sex scene opposite Ben Affleck in the 2014 movie “Gone Girl.”

In her book, “My Body” Emily Ratajkowski decries the commodification of women, the using of women’s sexuality to make a buck. Ratajkowski must not know the meaning of the word irony. It is absurd enough that someone who makes money by putting out images of herself in bathing suits on social media complains when a handful of people “troll” her posts” and criticize her looks. But now she wants the world to think she is a feminist icon somehow.
–

Everyone (okay almost everyone) has an opinion on @emrata – but I don’t think anyone could predict the contents of her deeply personal essay collection, My Body. I’m looking forward to interviewing her in London for @howtoacademy on 30th Nov. Tickets here https://t.co/Fs83UPKsk4

My Body is described by its publisher as a “profoundly personal exploration of feminism, sexuality, and power, of men’s treatment of women and women’s rationalizations for accepting that treatment.” OK.

In “Wonderland,” Annie Leibovitz recounts her encounters with fashion over five decades. “Looking back at my work, I see that fashion has always been there,’” says Leibovitz observes in the book’s preface. “Fashion plays a part in the scheme of everything, but photography always comes first for me. The photograph is the most important part. And photography is so big that it can encompass journalism, portraiture, reportage, family photographs, fashion.”
–

Leibovitz explained that her work for Vogue fueled the “fire for a kind of photography that I might not otherwise have explored.”