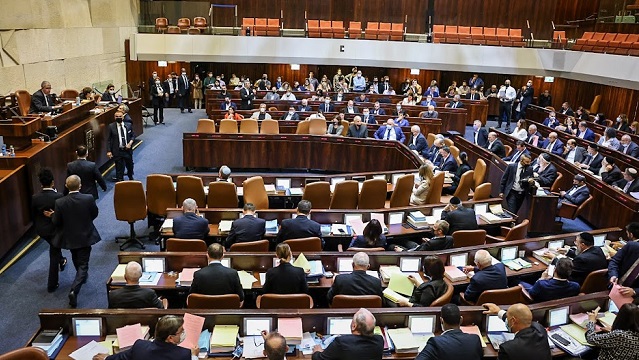 In a huge victory for Naftali Bennett, Israel has its first new state budget in more than three years. The new budget was passed this morning in the Knesset at 5:30 AM by a vote of 61 – 59. The vote came after almost two days of debate.

The Budget Framework Law was passed by a wider majority, 68-52. Aryeh Deri, leader of the ultra-orthodox opposition Shas Party, somehow accidentally voted with the coalition.

The new budget comes to NIS 609 billion ($195 billion). Its passage came just in the nick of time for the coalition government. Had it failed to pass one by the legally mandated deadline, it would have fallen. By Israeli law, if no budget is passed then the Knesset is dissolved and new elections must be held.

Opposition leader Benjamin Netanyahu had tried desperately through the night to win over just the one vote needed to block the new budget and bring down the government. He has been banking on the fact precarious state of the current government would cause it to fail early on. The coalition includes parties from all over Israel’s political spectrum and depends on votes from the outside by the Arab Ra’am (United Arab List) Party, to stay in power.

During his speech before the Knesset plenum last night Netanyahu even went so far as to call the government evil. “This evil government,” he said, “is a strange hybrid between “married at first sight” and “Survivor” – a group of people who have no real connection, who everyone knows will not last, the only thing keeping them together is the desire for a few minutes of false and fleeting glory.”

He went on to condemn the government for raising taxes and failing to keep its promises to the Israeli public saying, “Your lying government has promised to lower prices. In practice, you are raising prices.”

Gideon Sa’ar, Israel’s Deputy Prime Minister and Minister of Justice, leader of the coalition’s New Hope Party, and a former member of the Likud Party who once served as a cabinet minister under Netanyahu, condemned the former PM for his comments.

“In a poisonous speech full of incitement and lies,” Tweeted Sa’ar, “Netanyahu refrained from answering one question: Why did he not transfer a budget when he could have done so a year ago for the state?”

Netanyahu may actually turn out to be the biggest loser from the budget victory. His leadership of the opposition in the Knesset seems to be cracking. Coalition members have already defied him openly and members of his own party have begun to challenge him for its leadership.