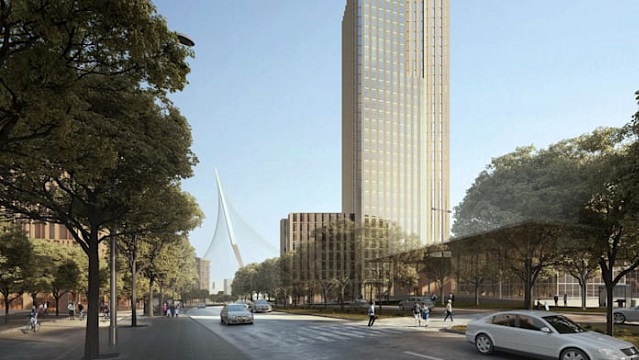 The Jerusalem Local Planning and Building Committee announced that it has approved the construction of what will become the tallest tower building ever built in Jerusalem. The Marom Tower will stand at forty stories high.

That may not sound like such a tall building considering the heights that skyscrapers reach in most of the world’s major cities. In 1931, the Empire State building opened as the world’s tallest building with 102 stories. Nowadays, that seems small when compared to the new towers that define the skylines of cities like Dubai and Kuala Lumpur.

But Jerusalem has always been different. It has resisted such large towers as they stand out in a mountain city and block the views of the older parts of town, the Old City and the Temple Mount itself. And in the past it was always a bone of controversy whenever anyone built a high-rise in the city like the 21 story Vert hotel which was originally a Hilton hotel when it opened back in the 1980s.

Then there was all of the uproar over the building of the Holy land apartment complex on top of a hill in the lower part of town. The twin tower complex can be seen from just about everywhere in town and to this day is still considered an eyesore by residents.

But in recent years, the entire face of Jerusalem has been changing. There is the Chords Bridge for the light rail, new high rise luxury apartment buildings all over the downtown area. These buildings can be seen from all over town and dwarf the beauty of the antique nature of Jerusalem that is what has always characterized the city.

The Marom Tower will have 40 floors, 80,000 square meters of office and commercial space, a hotel and conference facilities. The first 8 floors of the tower will host a cultural center, art galleries and a museum.

It is set to become part of the new commercial and office building center currently under development at the entrance to the city, where the main Highway 1 from Tel Aviv comes to an end. The development is called the Sha’ar Ha’Ir – City Gateway – project. This building will be situated between the Jerusalem central bus station and Israel’s national convention center and right by the city’s new train station.

According to its planners, the district will be constructed with 1.2 million square meters of mixed-use buildings interspersed with attractive, dynamic, public urban spaces featuring Israel’s largest integrated transport hub at its center. “This unique, cutting-edge commercial district is where the worlds of business, finance, academia, cultural and national institutions powerful intersect,” they declare.

This entire development, which will have as many as 20 new buildings, has turned the city of Jerusalem upside down for several years now. Two main traffic arteries were closed for the construction, forcing traffic to be rerouted. One lane in both directions has been left for buses, but it is constantly congested. The plan is to eventually open an underground passage to reopen the road, but who knows what will actually end up happening.

The city expects this new commercial and office zone to help revive Jerusalem’s local economy, stop a brain drain of residents moving out, and encourage professionals to move in.