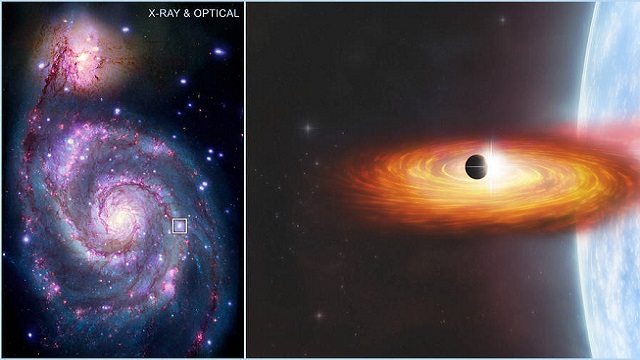 NASA scientists have declared that they discovered signs of a planet transiting a star outside of the Milky Way galaxy. If confirmed, NASA says that this would mark the first ever discovery of an extra-galactic planet.

Someone call Captain Kirk. William Shatner may have just become the oldest man to go into pace, but maybe now he can really go where no man has gone before.

The planet was uncovered using NASA’s Chandra X-ray Observatory. NASA says that this opens up a “new window to search for exoplanets at greater distances than ever before.”

The possible planet candidate was located in the in the M51 “Whirlpool” galaxy. This is known as a “spiral” galaxy. It was found by detecting the dimming of X-rays from an “X-ray binary,” a system where a Sun-like star is in orbit around a neutron star or black hole. The M51 galaxy is in the constellation Canes Venatic and is located about 28 million light-years from Earth.

Exoplanets are defined as planets outside of our Solar System. Until now, astronomers have found all other known exoplanets and exoplanet candidates in the Milky Way galaxy, almost all of them less than about 3,000 light-years from Earth. An exoplanet in M51 would be about 28 million light-years away, meaning it would be thousands of times farther away than those in the Milky Way.

“We are trying to open up a whole new arena for finding other worlds by searching for planet candidates at X-ray wavelengths, a strategy that makes it possible to discover them in other galaxies,” Rosanne Di Stefano, lecturer instructor in astronomy at the Center for Astrophysics at the Harvard & Smithsonian in Cambridge, Massachusetts, who led the study, said in a statement.

This new result is based on transits, events in which the passage of a planet in front of a star blocks some of the star’s light and produces a characteristic dip. Astronomers using both ground-based and space-based telescopes – like those on NASA’s Kepler and TESS missions – have searched for dips in optical light, electromagnetic radiation humans can see, enabling the discovery of thousands of planets.

NASA explains that because the region producing bright X-rays is small, a planet passing in front of it could block most or all of the X-rays, making the transit easier to spot because the X-rays can completely disappear. This could allow exoplanets to be detected at much greater distances than current optical light transit studies, which must be able to detect tiny decreases in light because the planet only blocks a tiny fraction of the star.