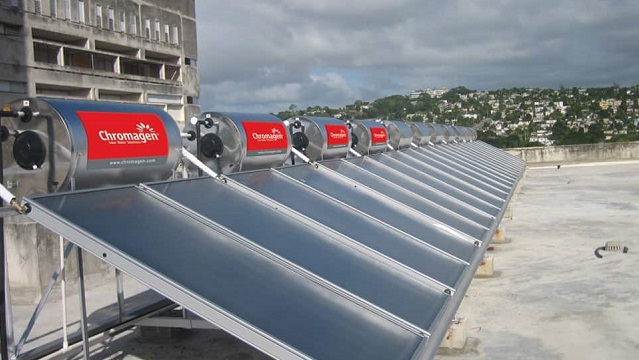 Chromagen, an Israeli solar hot water solutions company owned by Kibbutz Shaar Ha’Emakim, has been acquired by the Italian firm Ariston Group, which deals with hot water and heating, for 115 million NIS ($35 million). This is less than the $47 million valuation that Chromagen set for itself the last time it looked for a buyer back in 2015.

So, leave to Israel, Startup Nation, to find the solution, or solutions. Israeli startups are coming up with ways to provide drinking water out of the humidity in the atmosphere, harness solar power to reduce greenhouse emissions, and the development of green buildings which not only absorb heat and light for energy, but reduce the need for air conditioning with external gardens that shield the interior from heat, while eating up excess CO2 from the air.

This is all rooted in Israel’s history as a small poor nation with few natural resources. Also, as a desert country, water resources were always sparse there. Necessity truly is the mother of invention.

Recently, the Israel Innovation Authority released a report titled “Israel’s State of Climate Tech 2021.” The report showed that 10% of Israel’s high tech startups are devoted to innovations related to saving the environment and to fighting climate change.

In August, the United Nations’ Intergovernmental Panel on Climate Change (IPCC) released its official report in which the world body declared that not only is climate change very much real, but it also caused by human activities.

Founded in 1962, Chromagen develops, manufactures and markets renewable hot water solutions, with a strong heritage on solar thermal technology. Chromagen is headquartered east of Haifa, in Kibbutz Shaar Haamakim, Israel, and has two subsidiaries in Australia and Spain, as well as customers in about 35 countries worldwide. Chromagen employs over 300 people and in 2020 reported revenues of approximately $120 million.