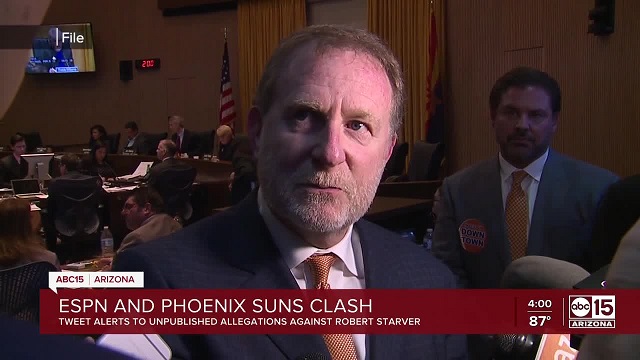 Robert Sarver, the owner of the Phoenix Suns NBA team, is in a lot of hot water over allegations of racism and sexism. Sarver is already denying the accusations ahead of their being revealed in an upcoming report from ESPN.

On Friday, NBA analyst Jordan Schultz released a preview of his upcoming report on what he described as a massive story accusing Suns owner Robert Sarver of racism, sexism and sexual harassment in a series of incidents. He attributed the reports to “sources” and said that there is enough evidence to support the claims adding, “There’s a real chance the league would forcibly remove Sarver.”
–

Give us a reason to be proud.
Give us something to rally around.

This is what a winning culture feels like. #ValleyProud pic.twitter.com/kcw1vE4Ii3

“This story is completely outrageous and false,” Suns CEO and President Jason Rowley said in a statement released by the basketball team. “It doesn’t represent – at all – the Robert Sarver I’ve worked alongside of for 15 years. He’s not a racist and he’s not a sexist.”

The Suns also posted a statement on Twitter saying that ESPN is planning on releasing what the team calls, “completely baseless claims against the Suns Organization Concerning a variety of topics.”

Documentary evidence in our possession and eyewitness accounts,” added the team, “directly contradict the reporter’s accusations, and we are preparing our response to his questions.”

The Suns went on to ask people not to rush to judgement “especially based on lies, innuendo, and a false narrative to attack our organization and its leadership”
–

Official statement from the Suns denies all of Sarver’s wrongdoings and accuses the upcoming ESPN article of recklessness and poor journalism. “Without any basis.” pic.twitter.com/v33fbmdK7n

“I am wholly shocked by some of the allegations purported by ESPN about me, personally, or about the Phoenix Suns and Mercury organizations,” Sarver said in a statement of his own. “While I can’t begin to know how to respond to some of the vague suggestions made by mostly anonymous voices, I can certainly tell you that some of the claims I find completely repugnant to my nature and to the character of the Suns/Mercury workplace and I can tell you they never, ever happened.”